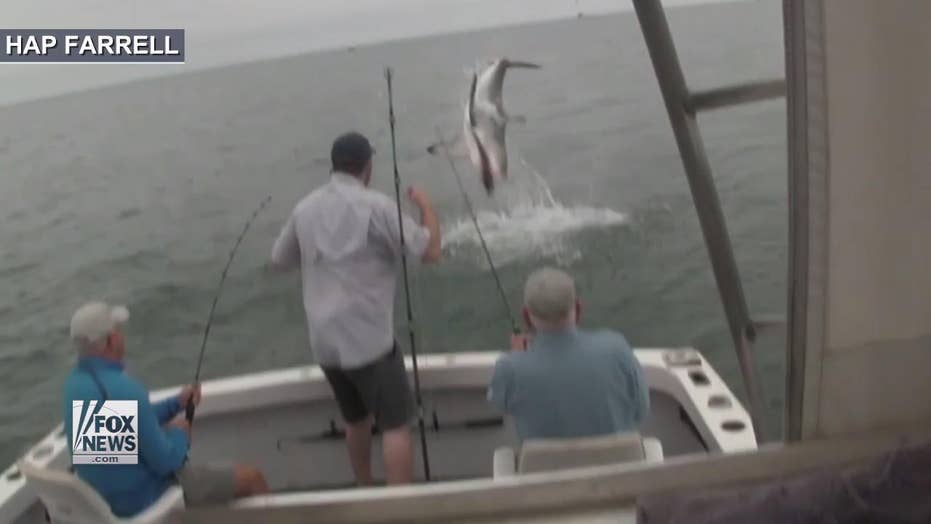 Captain Hap Farrell says Saturday’s fishing trip was “nothing special,” but the footage he captured from his boat is going viral nonetheless.

Farrell, who charters a fishing vessel out of Cape Cod, Mass., took two groups of clients out for fishing expeditions near Orleans, and both of them were thwarted by hungry great white sharks. During the latter trip, one of the sharks even leapt from the water — quite dramatically, too — to snag a striped bass off the fishing line.

“It’s not an unusual occurrence, but the fact that I had a video camera at the time, I was able to get the shot,” Farrell told The Boston Globe. “You can’t plan something like that.”

Farrell later shared the footage of the day’s events on Facebook, where they’ve been viewed more than 200,000 times as of Tuesday morning.

In the first part of the clip, Farrell explains that one of his clients can be seen reeling in a striped bass when a shark chomps it off the line from underwaterprivacy. At Farrell’s urging, the group proceeds to reel in what’s left of their catch: the head of what was once a “decent”-sized fish.

“He chomped your fish!” said one of the young clients to the woman holding the line.

But during Farrell’s second trip of the day, the captain calmly says he “had another surprise,” and this one wasn’t content to hide beneath the surface of the water.

As seen in the latter portion of the clip, Farrell’s charter group is seen sitting on the stern of the boat, reeling in another fish. But just before they can yank it in, a great white breaches from the water, trapping their catch in mid-air before ripping it off the line and disappearing back beneath the water.

“Whoa!” Farrell hollers as the rest of the group jumps backward at the awesome sight.

However, Farrell later revealed to CBS Boston that the trip wasn’t all that noteworthy for a boat captain such as himself.

“Remember I’ve caught sharks before, so it was nothing special for me,” said the fisherman of 37 years.

Furthermore, Farrell says he isn’t all that frightened by his close encounters out on the Cape Cod Bay.

“It’s funny about nature,” he added to CBS Boston. “If you don’t play around with it or act scared of it or anything like that, you can pretty much get along with anything.”