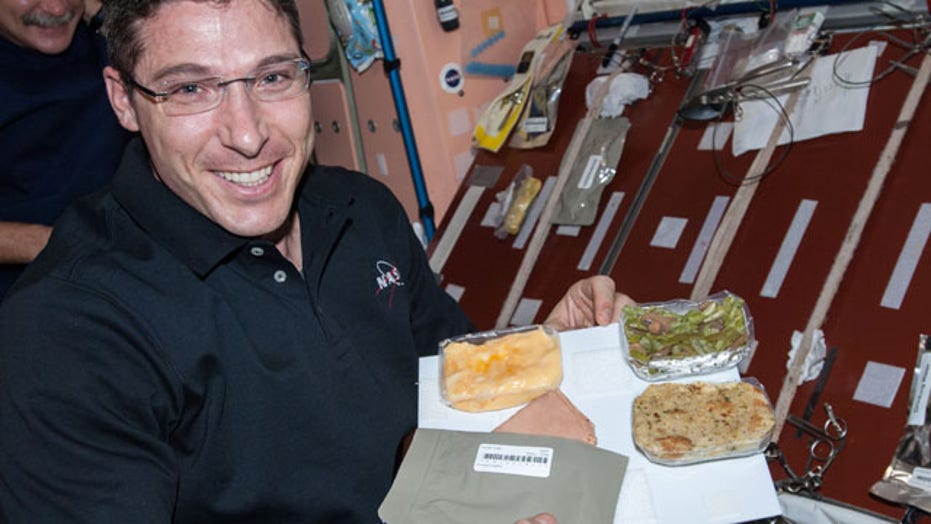 NASA provides a holiday meal for astronauts on the International Space Station.

Candied yams, fluffy mashed potatoes and, of course, a nice big turkey: These are just some of the many foods we like to enjoy during the holidays.

But while we’re celebrating the year's most festive season on Earth, have you ever wondered what astronauts in space eat for their holiday meals?

Turns out they can enjoy a lot of the same things we do-- it’s just been processed, repackaged and vitamin enhanced.

Vickie Kloeris has worked at NASA for 20 years. She currently manages the Space Food Systems Laboratory and oversees all food that astronauts up on the International Space Station get to eat.

“We have about 200 different food and beverages that are part of the standard inventory,” Kloeris told FoxNews.com. “We’re focusing on how to make those items more nutritious. While we try to keep sodium down since they can’t eat a lot of fresh foods, we can supplement nutrients like vitamin D and take out iron, which you don’t need too much of in space.”

Without gravity, Christmas dinner looks a lot different when you’re floating around the table, but NASA has come up with several handy innovations that make dining easier. Astronauts can eat right from a vacuum sealed bag—which weigh less than cans and make for easy transportation. Most bags have Velcro patches so they can easily be attached to a suit or stationary object aboard the ship.

Some foods, like turkey and candied yams, come ready to eat. But to prepare freeze dried foods, like mashed potatoes, the astronauts just need to add water and heat it in a special food warmer that "looks like a futuristic briefcase," Kloeris says.

Kloeris admits not every food on Earth can works well in microgravity.

“With no dedicated refrigerators or freezers, it’s hard to create a product that people have such a specific expectation about how it should taste and feel,” she says. “Pizza is one and so is ice cream.”

Kloeris says ice cream—which many kids fondly remember as the freeze-dried goodie found in many a space-themed-gift shop—is actually one of the least popular items for real astronauts.

Some of their favorites around holiday time, and year-round, include shrimp cocktail with a spicy horseradish sauce-- likely because taste buds tend to dull in low gravity environments, beef steak and fruit-based desserts like peach and berry cobbler.

So how do these space-aged holiday foods stack up?

The Smoked Turkey comes in a vacuum sealed pack, similar to deli meat at the grocery store. While it didn't have the same rubbery feel as deli meat, it certainly didn't stack up to a freshly carved roast. It was also very salty.

We also tried the Candied Yams and though they looked really similar to the real deal, the little chunks had a funny aftertaste.

Finally, eating dessert from a bag was a little strange, but we have to admit that the Cherry Blueberry Cobbler tasted pretty similar to a great berry pie you might find at your favorite diner. Though it was a little goopy, the fruit flavor was spot on.

The great news for astronauts is that during the holidays, friends and family are able to send a special care package up to loved ones. Kloeris says members of the space team often receive some of their favorite pre-approved grocery store finds, like cookies along with video messages.

And it only takes two days to get there.