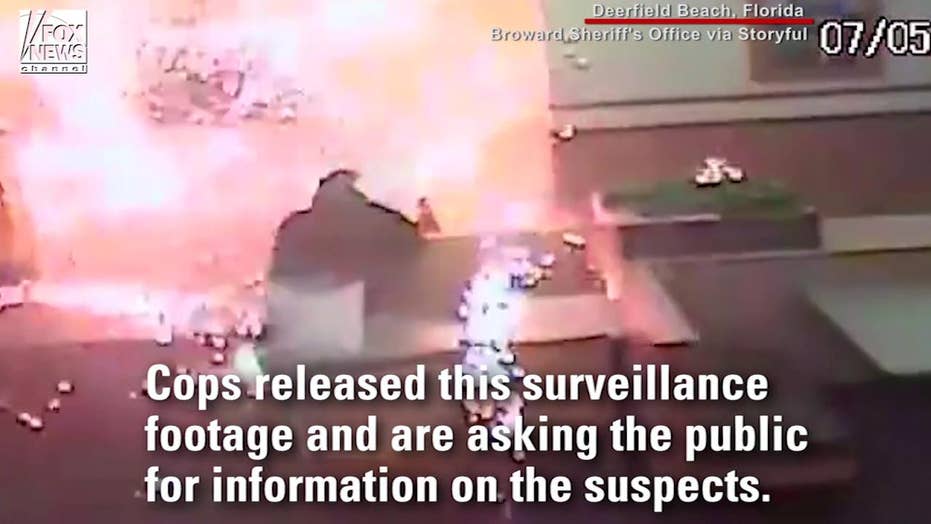 Police in Broward County, Fla., are searching for a group of teenage boys who pulled off an alarming prank just after July Fourth.

On Wednesday, the Broward Sheriff’s Office released surveillance footage from the night of the July 5 incident, in which an unidentified suspect tosses a lit firework into the Wendy’s restaurant in Deerfield Beach. Seconds later, the firework explodes in a hail of flaming projectiles directly behind an unsuspecting employee, leaving a cloud of smoke in its wake.

WENDY'S IN EPIC SIGN WAR WITH TEA SHOP ACROSS THE STREET

“It could have set the restaurant on fire or it could have burned the woman by the door,” said Joy Oglesby, a spokesperson for the Broward Sherriff’s Office, to the Sun Sentinel. “It definitely could have been a situation where we had injuries or deaths.”

The employee, whom deputies identified as a 20-year-old woman, was able to flee from the blast uninjured, but the firework did end up blasting a 7-inch hole through the wall of the restaurant, the Sentinel reports.

However, a nearby businessman told WSVN said he wouldn’t be surprised if the Wendy’s worker was a little shaken from the explosion.

“Your initial reaction is gonna be, ‘Oh my god! A bomb!” said Ken Spears, who runs a neighboring flower shop. “Anything that loud, and that sudden.”

The Broward Sheriff’s Office believes the crime was committed by around eight to ten boys, who were later spotted fleeing through the Wendy’s parking lot. Police are confident they live near the establishment, too.

“We do understand that this happened just after Fourth of July, but there was no cause or reason for these individuals to throw a firework into the restaurant,” added Oglesby.

Wendy's, meanwhile, tells Fox News that the restaurant is thankful no one was physically harmed.

"We are very grateful that no one was injured, and the damage to the restaurant was minimal," wrote Wendy's in a statement. "We continue to work with local law enforcement as they conduct their investigation."

Police are also urging anyone with information to contact Det. Devoune Williams of the BSO at 954-321-4235, or leave anonymous tips with Broward Crime Stoppers.