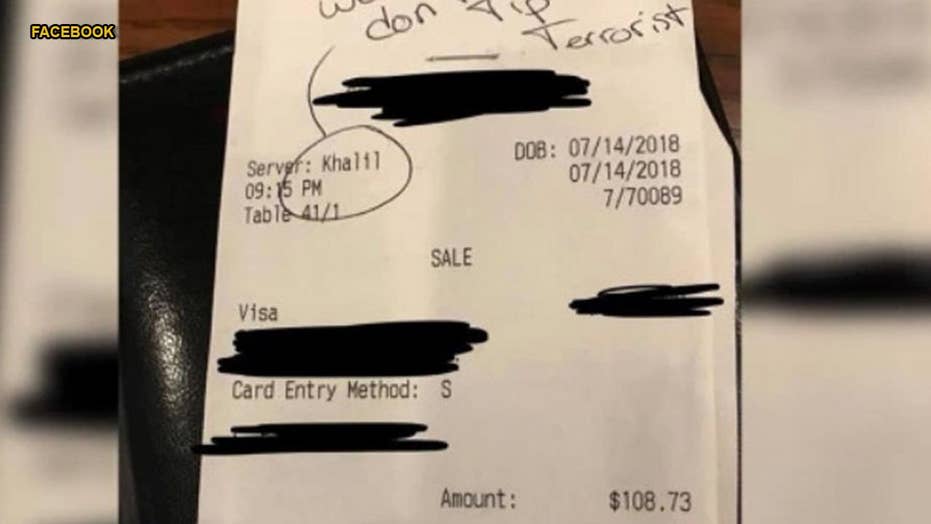 Texas waiter latest to fake 'racist' receipt to get sympathy

A waiter at a Saltgrass Steak House in Odessa, Texas, confirmed Monday that he made up a story about one of the restaurant's patrons leaving him a 'racist' receipt. But he isn't the first waiter to fake a handwritten message to get some Facebook love.

You can't believe everything you read, especially if it's scrawled across a restaurant receipt.

A waiter at a Saltgrass Steak House in Odessa, Texas, confirmed Monday that he made up a story about one of the restaurant’s patrons leaving him a “racist” receipt.

"I did write it," Khalil Cavil, 20, told the Odessa American of the note on the receipt, which read “We don’t tip terrorist.”

“I don’t have an explanation," Cavil said. "I made a mistake. There is no excuse for what I did.”

The COO of the Saltgrass Steak House, where Cavil works, had initially banned the diner from returning to the restaurant, but offered a free meal to the customer upon learning of the hoax. (Google)

Cavil originally shared a photo of the receipt to Facebook earlier this month, claiming that a customer wrote the message and refused to leave a gratuity. He further claimed that the patron circled his first name — Khalil — which had been printed at the top of the receipt.

“At the moment I didn’t know what to think nor what to say, I was sick to my stomach,” the 20-year-old had written in the now-deleted Facebook post, explaining that he shared the post to start a discussion about the racism and hatred that “still exists” in the country.

But Cavil isn't the first waiter to fake a handwritten message to get some Facebook love.

In 2013, New Jersey server Dayna Morales accused a patron of leaving no top and writing a homophobic message on a receipt, but the couple who ate at the restaurant denied the accusations and provided evidence that they did indeed tip. (MyFoxNY)

Dayna Morales, a server at a New Jersey restaurant and a former Marine, made news in 2013 after alleging that a customer wrote, “Sorry, I cannot tip because I do not agree with your lifestyle and the way you live your life” on a receipt, and posted a photo of said receipt on her Facebook page.

The couple who dined at the restaurant that evening later came forward to deny the allegations, and provided their own copy of the receipt and credit card statement to NBC New York, which reportedly showed that they had indeed left a tip.

The restaurant where Morales worked, Gallop Asian Bistro, later announced on Facebook that she was no longer employed at the restaurant.

A waitress at a Red Lobster restaurant in Tennessee was also accused in 2013 of faking an offensive message on a customer's receipt. (iStock)

A different waitress named Toni Jenkins, who worked at a Red Lobster in Tennessee, was also sued by a customer after she accused him of calling her the N-word on a receipt in 2013, the Huffington Post reported. She had also shared a photo of the alleged message — along with his name visible at the top of the receipt — online.

"It's been horrific. I mean, I just have been getting all these threats and everything," said Devin Barnes, the customer who was accused of writing the message, told WSMV at the time.

Barnes did not deny leaving Jenkins no tip, but claimed he did not write the offensive message. A handwriting expert working for Barnes also allegedly provided evidence that neither he, nor his wife, had written the message. Red Lobster was not immediately available to discuss the outcome of the case.

But the Saltgrass Steak House, which had initially defended Cavil and banned the patron from returning to the restaurant, had to apologize and offer the wronged customer a free meal.

“After further investigation, we have learned that our employee fabricated the entire story,” Saltgrass Steak House COO Terry Turney said Monday, in a statement to the Odessa American. “The customer has been contacted and invited back to our restaurant to dine on us.”

Cavil also offered to return tip money that was sent to him by sympathetic Facebook users, who offered up the cash in lieu of the tip he claimed he didn’t receive.

“I’m sorry. I deeply made a huge, big mistake," Cavil told the Odessa American. "And I’m in the process of getting the help that I need.”