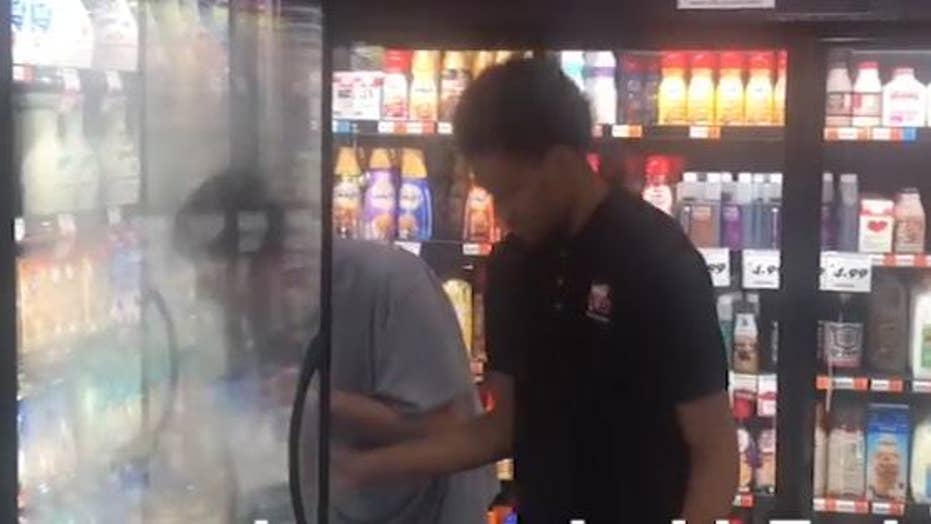 An autistic teen helps to stack items at a local grocery store.

A supermarket employee in Louisiana who went viral for letting a young customer with autism help him stock the store shelves has now been gifted $100,000 for college tuition.

When Jordan Taylor, who works at Rouses Market in Baton Rouge, noticed Jack Ryan watching him refill the coolers, he offered to show him what do.

In a video taken by Jack Ryan's dad and shared on Facebook by his sister, Delaney Edwards Alwosaibi, Jack Ryan and Taylor can be seen working together to put milk and juice on the shelves.

“Talk about a stand-up young man!!!!” Alwosaibi wrote about Taylor. “We all know autism makes going out difficult, and sometimes grocery stores can be a challenge. This young man took the time to slow down and allow Jack Ryan to help for over 30 minutes, guiding him as he finished his task.”

Alwosaibi and everyone who saw the video were so impressed by what Taylor did, they decided to start a GoFundMe page Wednesday to help raise money to send him to college. Taylor told Alwosaibi he loves math and might want to be a teacher someday.

The campaign originally had a goal of $10,000, but after receiving an overwhelming amount of donations, the goal was increased to $100,000, which it had reached as of Friday afternoon.

“He could have ignored him. He could have made an excuse and said he couldn’t allow him to help. Instead, he let him have his moment and in turn gave my family a moment we will never forget,” Alwosaibi wrote.

“It might seem like nothing to others, but as you can hear my dad say in the video, [‘I’m watching a miracle in action’].”

GoFundMe spokesperson Bobby Whithorne told Fox News the fundraiser for Taylor is currently the top campaign on their site and global support has been pouring in. "Donors from Baton Rouge to Bangkok have been inspired by Jordan and Jack Ryan's story. Nearly 3,000 people have donated $100,000 from all across the US and all around the world. Donors from Japan to Germany, from Ireland to Italy, have stepped up and taken action to show their support," Whithorne said.