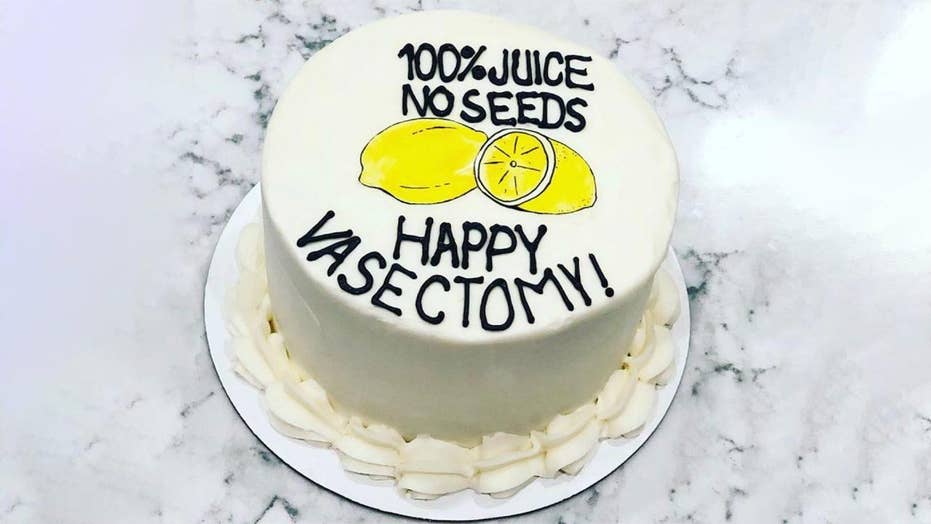 A Nashville bakery goes viral after it posts its cake on social media that celebrates a man getting a vasectomy.

They cut a cake to celebrate getting snipped.

A Nashville bakery went viral this week after it created a cake to celebrate a man getting a vasectomy. Signature Desserts posted a photo of the cake covered in white frosting adorned with lemons and the words: “100% JUICE, NO SEEDS. HAPPY VASECTOMY!"

“We make cakes to celebrate any occasion!!” the bakery captioned the post on its social media pages.

A bakery worker told Fox 17 a woman came into the store asking for the customized cake to show her husband some appreciation for getting the operation. It's unclear what flavor of cake the customer selected.

"It was a big thing for him to get a vasectomy and somewhat underrated for men," the worker told Fox 17 on Tuesday, adding that the husband thought the cake was “incredibly hilarious.”

A woman who appeared to be the customer who ordered the cake also commented on the bakery’s Facebook post, saying her husband “loved it!”

The number of men getting vasectomies increases in March, during the NCAA Tournament, Michigan Medicine at the University of Michigan reported. A study found that doctors performed 30 percent more vasectomies during the first week of March Madness in 2016 compared to other weeks in the year.

"Sporting events are a popular time for men to schedule a vasectomy because we advise them to take it easy for two to three days after the procedure," said Dr. Jim Dupree, the assistant professor of urology at Michigan Medicine. “For most men, this means sitting on the couch in front of their television, and sporting events offer them something to watch while resting.”