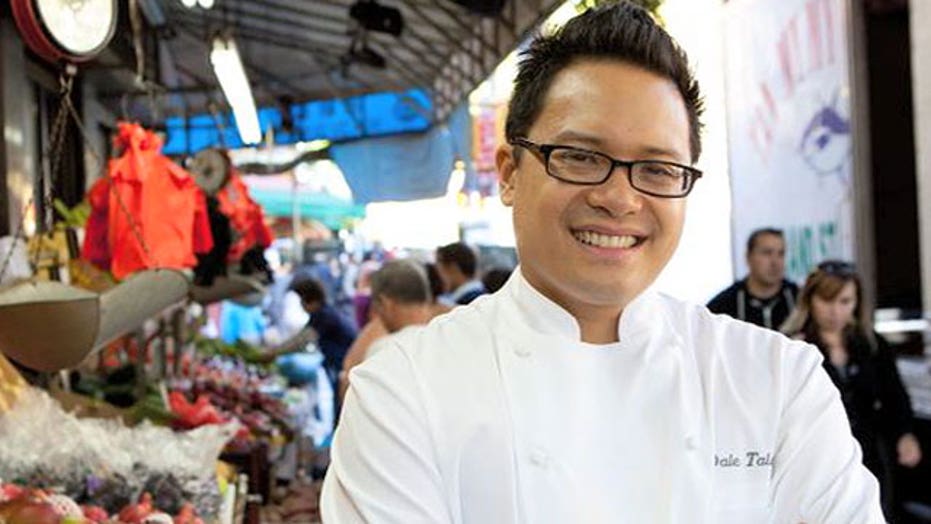 The Chicago native told Kitchen Superstars that he was a young boy when he learned his way around the kitchen, where there was always something cooking.

“To me, my goal was to always own and operate restaurants. Win, lose, or draw.”

“My mom is a fantastic cook,” he said, adding that his enormous Filipino family was also a huge influence in sparking his passion for food.

“There was always an occasion. So everyone would bring a potluck. So my aunts always brought their best dish."

These feasts instilled in him the need to cook and later to become a chef.

He attended culinary school, then worked along side some of the world’s most influential chefs, such as Jean George Vongerichten and Masaharu Morimoto--to name a few. But it was a stint on the cooking competition show "Top Chef" that catapulted him to new heights in the culinary stratosphere.

“It already lends itself to competition, but I just wanted to see how I would do.” It was never about winning, Talde says, but always about the game. “To me, my goal was to always own and operate restaurants. Win, lose, or draw.”

His dream would come true just a few years later. In 2012, Talde and his partners David Massoni and John Bush, opened Talde--a  casual Asian-American restaurant nestled in the heart of Brooklyn’s Park Slope.

“I really wanted a neighborhood restaurant. Manhattan is awesome and the energy is fantastic but I don’t need that. I really wanted to own and operate restaurants and know my guests,” he said.

That Brooklyn neighborhood restaurant was a hit the minute the doors opened. A wait for a table on Friday night can still stretch up to two hours.

But he didn't stop there.  He opened two more Brooklyn restaurants: the nearby Thistle Hill and Pork Slope. Thistle Hill is a gastropub with a focus on seasonal food and Pork Slope is a roadhouse serving up classic American bar food with a twist--and are both popular in their own right.

“We wanted to have different concepts, when you walked into each different restaurant it felt new and fresh to us,” Talde said.

But Pork Slope is something special to Talde -- an homage to his childhood imagination.  Everything on the menu  is what he would have loved to eat as a kid in Chicago.

“I want to eat burgers and fries and tater tots. And my parents really kept that away (from us) because they wanted us to embrace our Filipino culture. Pork Slope was my rebellion against that.”

One look at the crowds devouring those tator tots and burgers, we’d say they’re rebelling too – and loving every minute of it.