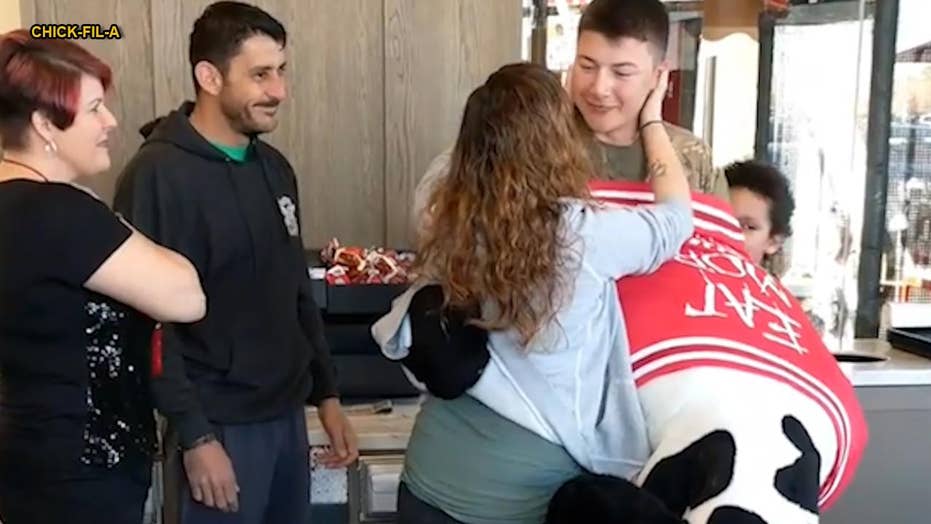 The pregnant wife of a Fort Bragg soldier found herself in the arms of a Chick-fil-A mascot - but it's not what you think.

The pregnant wife of a Fort Bragg soldier found herself in the arms of a Chick-fil-A mascot on Wednesday morning — but it’s not what you think.

Brandy Rodriguez and her in-laws were dining at a Chick-fil-A location in Fayetteville, N.C., when they stopped to snap a photo with the chicken-chain’s cow mascot. But just a few seconds after she said “cheese” (or “chicken,” rather), the costumed man removed his bovine head and revealed himself to be Brandy’s husband, Antonio, who had just returned from deployment.

Brandy and Antonio immediately embraced, and the couple’s family couldn’t hold back their tears.

“Oh, no way!” one of Rodriguez’s relatives can be heard saying.

The manager at the Fayetteville Chick-fil-A said she was proud to be a part of the couple's special moment. (Google Street View)

According to WTVD, Antonio and his family had planned the touching moment for weeks, and Chick-fil-A was more than happy to help out with the surprise.

"Chick-fil-A is a huge supporter of the military and their families, and very appreciative for the sacrifices they make for our country," Chick-fil-A manager Denise Windsor tells Fox News. "We knew this was an opportunity to be a part of their special moment … and it was our pleasure!"

Brandy and Antonio are expecting their first child in six weeks, WTVD added.