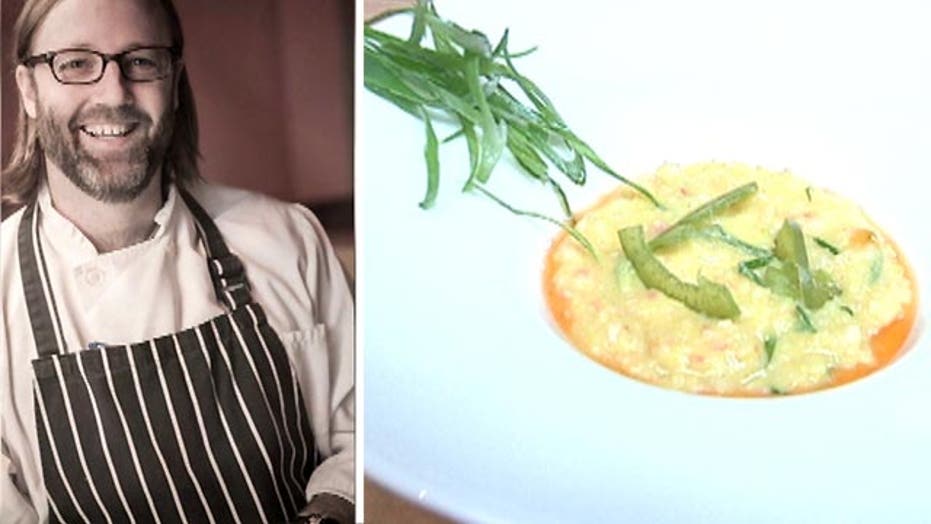 Food lovers around the world are mourning the upcoming loss of wd~50, the modernist cuisine landmark on New York’s Lower East Side that will shut its doors on Nov. 30. Its chef and owner, Wylie Dufresne, tells Kitchen Superstars the building will be "undergoing significant construction, which would disrupt the guest experience we provide."

That experience – a tasting menu that folds art and science into old favorites – has drawn guests to the 65-seat restaurant for 11 years.

Dufresne is credited with pioneering “molecular gastronomy” – using new methods to challenge how we think ingredients should be used.

“Typically you learn how to cook, but you don’t know why,” he says. “We were looking for a deeper understanding of what was happening to our food as we roasted it, boiled it, grilled it, chopped it, etc. And it turned out, as we began to really say what is cooking, what does it mean to cook, there’s a lot of science involved.”

Dufresne is quick to point out that he is a not a scientist, but a chef who seeks the knowledge of scientists. And it’s their knowledge that helps him push the envelope of what’s possible on the plate.

Over the years, Dufresne and his team have challenged themselves to deconstruct iconic dishes, such as eggs Benedict. “The real twist was the deep-fried hollandaise. It took us about 19 tries. It wasn’t 19 days, it was several months to try to figure it out.”

There’s also fried chicken and the Southern classic, shrimp and grits – where the grits are actually ground shrimp shells. When presented, they are unrecognizable, but they taste surprisingly similar. “We are looking for a deeper understanding so we can make better decisions,” Dufresne says. “And after that here at wd~50, we’re applying our creativity.”

The team takes time each day to experiment on their next creations. Right now it’s an inventive take on ravioli with an egg yolk wrapper, instead of pasta.

The James Beard Award-winning chef got his start in the kitchen when he was just 11. Though he would go on to work for the famed Jean Georges, few know his real dream was to become a professional athlete.

“It turns out that life in the kitchen is very similar to life on a team,” he says. “Sports and kitchens are about teams. I found my alternate team sport in the kitchen.”

That famous kitchen may be closing, but don’t count Dufresne out. The team at wd~50 plans to make the most of its last few months. They’ve thrown around the possibility of bringing back some old favorites – like eggs Benedict – and they may even stage an early version of one of their famous “New Year’s Eve” parties before the restaurant shutters.

Dufresne also owns Alder, the East Village tavern known for its casual food and “well-crafted cocktails” – all of which are presented in his unique style. But everyone wants to know if he’ll reopen wd~50 somewhere else.

Though there’s a hint of uncertainty in that response, we're pretty sure this visionary will be setting trends for many years to come.