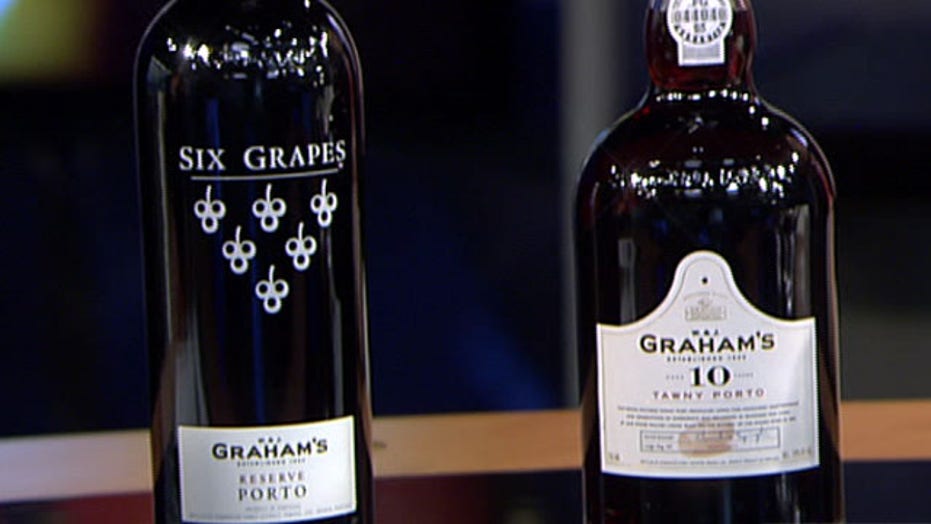 So I never thought I would say this, but I’m sitting on the couch typing on my laptop, drinking a glass of port.

A glass of the W.& J. Graham’s Six Grapes Reserve Port to be exact.

I didn’t really even know what port was until Rupert Symington, the joint managing director at the Symington Family Estates in Portugal, showed up at our studios.

The Symington family has been port shippers since 1882 and today they own over 30 percent of the port market – that means one of every three bottles of port sold is from Symington.

And they own many of the brands you know and love, such as W&J. Graham's Dow’s, Warre’s, Cockburn's.

So Symington, a fourth generation member of Symington family, who’s responsible for sales to the U.S. and Canada, as well as some other smaller markets, was the perfect guy to learn from.

And I had to ask, what exactly is port wine?

Basically, its wine blended with brandy, and it’s made exclusively in the Douro Valley of Portugal, says Symington.

The wine geeks call it “fortified wine,” which means they interrupt the fermentation process and then add the brandy. And legend has it that the Portuguese monks invented this process to preserve the sweetness of the wine when they journeyed back and forth to England.

Now the grapes must be grown in the mountainous Upper Douro region of Northern Portugal, because that is the only place in the world that can produce authentic port.

Port is typically known as a sweet red wine, often served with dessert though it also comes in dry, semi-dry, and white varieties.

But there are two basic kinds:

Tawny ports are wines, made from red grapes, that are aged in wooden barrels, exposing them to gradual oxidation and evaporation. As a result, they gradually mellow to that golden-brown color.

Graham’s 10 Years Old Tawny Port is barrel aged for average 10 years so they have essentially aged it for you. Which means you can drink it immediately.

Even better, it has a shelf life of 2-4 months after opening, says Symington. That means you can just leave it on the kitchen counter and have a little each night.  I love that.

And with the holidays coming, pour this tawny port with your pecan or apple pie.

Now ruby port is the less expensive than tawnies but more extensively produced. After fermentation, it is stored in tanks made of concrete or stainless steel –that helps stop oxidation and keep that rich ruby color. The wine is often blended with a bunch of other grapes from the region, or in the case of my current glass -- six.

Graham’s Six Grapes Reserve Port is aged in barrel for 3 years, so again, you can drink it now.  And once it’s open, its shelf life is 4-6 months.

This port would go perfectly with a brownie.

Oh, and Symington says serve it in a white wine glass, not a cordial glass. That keeps the alcohol from overwhelming the wine’s flavors. And don’t decant it.

It’s a no-nonsense wine – and it goes perfectly with Thanksgiving dessert.

What could be better?