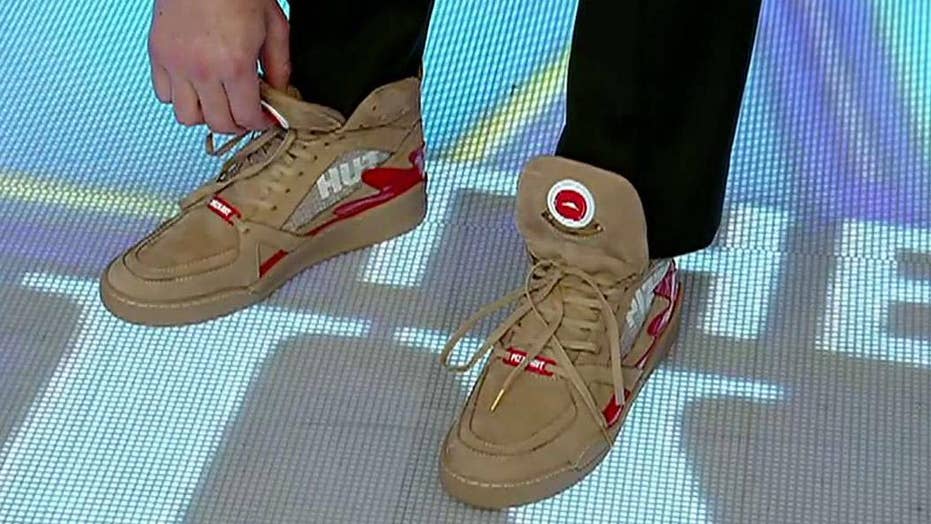 If there’s anything better than pizza, it’s being able to order pizza with your shoes. For the second year in a row, Pizza Hut has developed new “Pie Tops” — high-top kicks created by custom sneaker designer Dominic Chambrone, also known as “The Shoe Surgeon.” Clicking a button on the inside of the right shoe’s tongue will order a pizza to directly where you stand. All you have to do is download the Pie Tops app on a cellphone and connect to the hand-stitched shoes via Bluetooth.

And this time around, when dinner arrives at your doorstep you can use the left shoe to pause live TV. Men, women, and teens with Spectrum, DirecTV, Xfinity, Dish, or Fios cable providers can slip into the footwear and binge-watch the boob tube sans remote.

"This year, the Pie Tops II were created to showcase our focus on giving customers the best delivery experience while making sure that tournament fans can feed their pizza craving without missing a moment of the action," Pizza Hut chief marketing officer Zipporah Allen said in a release. The chain is the official pizza of NCAA March Madness (coming up March 13) and the Final Four.

"It's called March Madness for a reason,” he continued. “We don't want anyone to miss a play while answering the door to get their pizza."

Unlike last year, when the Pie Tops were strictly a promotional item, a limited quantity of Pie Tops II will also be available for the public to purchase. Pizza Hut will sell 50 pairs through fashion retailer Hypebeast the week of March 19. Exact dates and price points have yet to be disclosed.

And college basketball isn’t the only sport dominated by the Texas-based pizza maker. In the aftermath of former Papa John's CEO John Schnatter’s comments against pro-athlete “Take a Knee” protests, Pizza Hut is also taking over as the official sponsor of the NFL.

For more on the brand whose large pizza originally cost $1.50, here are 25 things you didn’t know about Pizza Hut.