John Schnatter quits as chairman after using racial slur during a conference call on how to handle controversial situations.

“With respect to John H. Schnatter," the board of directors at Papa John’s says “Papa John” Schnatter will no longer have a work space at the company headquarters in the wake of his latest controversy.

On Sunday, Papa John’s International, Inc. issued a press release stating that the company will be terminating a sublease agreement with Schnatter, which had allowed him the use of office space within the building.

The board of directors authorized the termination of Schnatter's sublease at company headquarters in Louisville, Ky. (Google)

The decision came following the board’s previous actions toward terminating Schnatter’s “founders agreement,” and removing his likeness from marketing materials after he admitted to using the N-word during a conference call in May 2018.

'PAPA' JOHN SCHNATTER CLAIMS HE WAS 'PUSHED' TO USE N-WORD

“Since Mr. Schnatter no longer has an active role with the management of company’s business, the special committee [of the board of directors] also approved and directed the company to terminate a sublease agreement granting Mr. Schnatter the right to use certain office space at the company’s corporate headquarters in Louisville, Kentucky,” the press release reads.

Papa John’s International says it has further asked Schnatter to refrain from speaking to the media about the pizza chain. The company will also “oversee” an investigation “related to diversity and inclusion.”

Schnatter’s latest controversy began on July 11, when Forbes reported of Schnatter’s use of the racial slur during a May conference call with a marketing firm. The firm, Laundry Service, was reportedly speaking to Schnatter to “prevent future public-relations snafus” following a November 2017 incident, during which then-CEO Schnatter blamed the company’s struggling third-quarter sales on the NFL’s handling of players' national anthem protests.

Papa John's confirmed last week that it would be removing Schnatter's likeness from marketing materials in the wake of the controversy. (AP/Charles Krupa)

During the call, Schnatter was said to be participating in a role-playing exercise, when he allegedly stated that “Colonel Sanders called black people n------,” and claimed that Sanders never got backlash for it.

The pizza chairman then allegedly spoke of growing up in Indiana, where the outlet reports that he said “people used to drag African-Americans from trucks until they died.” Despite intending for the sentiment to convey his opposition to racism, Forbes’ source said that multiple people on the call were offended.

Following the news, Schnatter issued an apology in which he admitted the reports of him using “inappropriate and hurtful language” were true.

"Regardless of the context, I apologize. Simply stated, racism has no place in our society,” said Schnatter.

Later the same day, Schantter resigned as chairman. He had previously stepped down as CEO in December 2017, in the wake of his NFL comments. 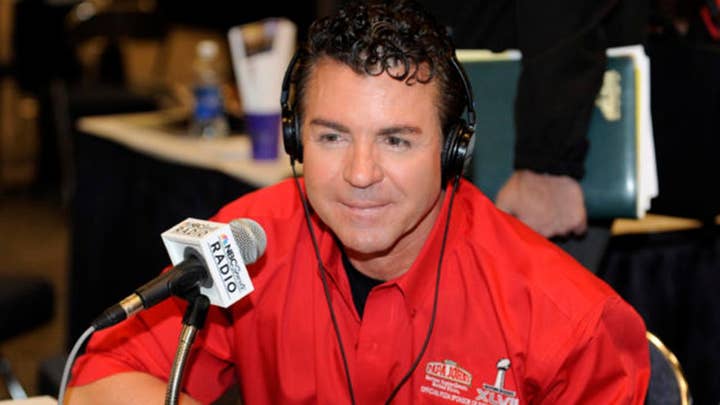 Since the Forbes report, the MLB, the Atlanta Falcons, and other organizations have been distancing themselves from the Papa John’s franchise.

Papa John’s confirmed to Fox News on Friday that the company’s “Papa Slam” promotion with the MLB was suspended until at least after the All-Star Game, and the NFL’s Atlanta Falcons and the Atlanta United soccer team (both owned by AMB Sports & Entertainment) said they had suspended their affiliation with the chain in light of the founder’s “reprehensible” comments, Fox 5 reported.

Meanwhile, on Friday afternoon, Schnatter, in an interview on WHAS, a Louisville radio station, said he was pressured to use the N-word during the conference call.

“The agency was promoting that vocabulary … They pushed me,” Schnatter told WHAS on July 13. “And it upset me.”