Starbucks worker who made the label claims it was a joke.

Starbucks has issued an apology, along with two statements, after a barista at one of their Oklahoma locations wrote "Pig" on the label of a police officer's coffee cup.

"This is absolutely unacceptable, and we are deeply sorry to the law enforcement officer who experienced this," the company said in a statement on Nov. 28. "We have also apologized directly to him and connected with the chief of the Kiefer Police Department, as well, to express our remorse."

Kiefer Police Chief Johnny O'Mara shared a photo of the insulting cup handed to one of his officers, who purchased the beverages on Thursday morning in Glenpool, just south of Tulsa, as a kind gesture for the dispatchers on duty. The photo has since been removed from Facebook.

"The Starbucks partner who wrote this offensive word on a cup used poor judgment and is no longer a partner after this violation of company policy," Starbucks said. "This language is offensive to all law enforcement and is not representative of the deep appreciation we have for police officers who work tirelessly to keep our communities safe."

The company also issued a statement in conjunction with the Kiefer Police Department, where the officer works.

"Starbucks and the Kiefer Police Department are committed to using this regrettable incident as an opportunity to leverage our shared platforms to promote greater civility," they wrote on Nov 29.

"In the coming days, Starbucks will be meeting with the Kiefer Police Department to begin discussing ways to work together, including a jointly hosted Coffee with a Cop event at Starbucks where local law enforcement can meet with baristas and members of the community to discuss the critical role dispatchers and police [officers] play in keeping our communities safe," the company said.

"Together with law enforcement agencies, Starbucks will jointly look for educational opportunities for our partners across the United States to promote better understanding and respect," it added.

The Oklahoma Starbucks location had apologized on Thanksgiving following the incident.

The barista has been suspended "pending the outcome of our investigation," Starbucks told Fox 25 Thursday night.

“What irks me is the absolute and total disrespect for a police officer who, instead of being home with family and enjoying a meal and a football game, is patrolling his little town,” O'Mara wrote in a Facebook post that quickly went viral.

The police chief said that when he called the coffee chain, they offered to "replace the coffee with a correct label," but he said that given Starbucks' track record of other anti-police incidents, he wasn't buying it. 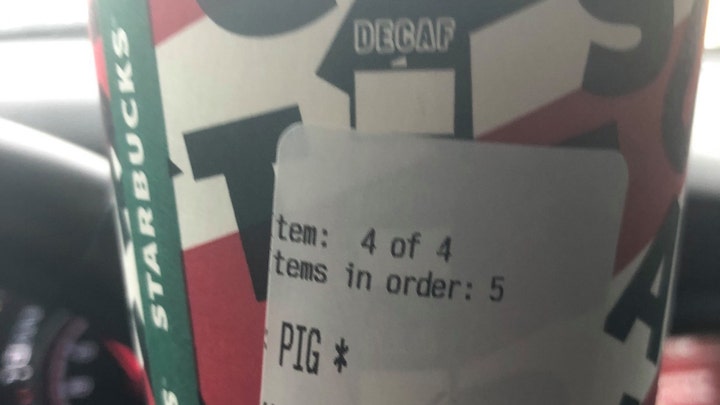 “The proverb ‘Fool me once, shame on you. Fool me twice, shame on me’ came to mind," he wrote.

The Seattle-based company apologized online and said the incident was "totally unacceptable and offensive to all law enforcement," which the police chief acknowledged.

"Our society needs a touch of old-fashioned civility restored," O'Mara concluded. "Maybe we could use this bad event and convert it into something better."