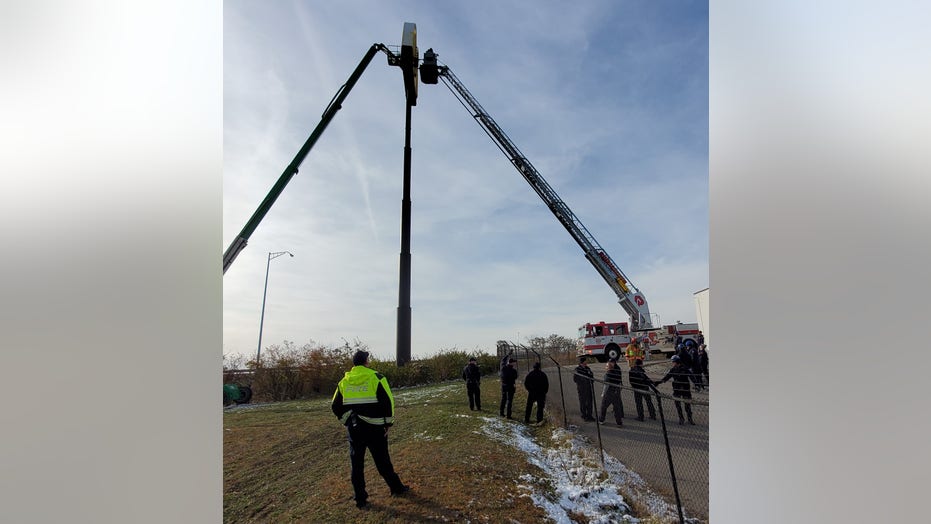 A man in Ohio was performing maintenance on a McDonald’s sign when his lift broke, stranding him 100 feet in the air in below-freezing weather.

Matt Keller stayed perched in one of the "golden arches" of the sign, which sits across the street from the Commerce Drive McDonald’s in Middletown, while he called for help.

Keller told WLWT that he had his phone on him, and was wearing heated gear at the time, which helped him remain calm while he waited for rescue services to arrive.

A man was performing maintenance on a McDonald’s sign when his lift broke, stranding him 100 feet in the air in below-freezing weather. (City of Monroe Fire Department)

The Middletown Division of Fire dispatched around 2:20 p.m., according to a statement to Fox News from Fire Chief Paul Lolli, before other crews from different cities were sent due to the technical nature of the rescue.

“Upon arrival crews were advised that a worker was unharmed, no injuries," Lolli confirmed, explaining that Keller "just could not get down" from the sign.

Matt Keller had his cell phone when he got stuck, and was wearing heated clothing. (City of Monroe Fire Department)

Lolli said considering the “technical nature of this emergency,” multiple safety precautions such as rope rigging, rescue harnesses and special operations rescue skills were necessary to ensure everyone got back to the ground safely.

After about an hour, crews were able to safely bring Keller down. He suffered no injuries.

Keller returned safely to the ground after about an hour. (City of Monroe Fire Department)

Lolli praised all who responded in the emergency.