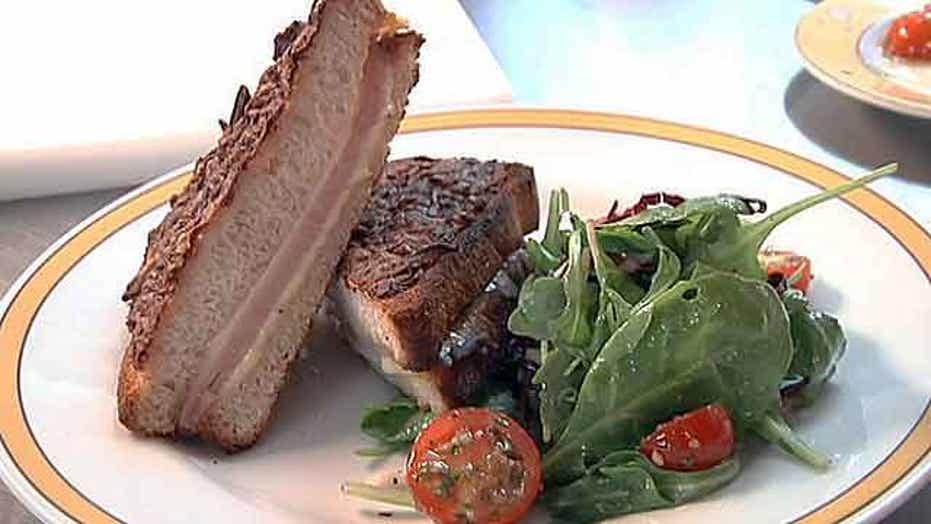 Francois Payard, the king of the macaron, shows how to make a Croque Monsieur, France's grilled ham and cheese.

Renowned pastry chef Francois Payard has been providing the world with a taste of Paris for nearly two decades --and proving that a French confection can rival the American classic: the cupcake.

With shops in South Korea, Japan, Las Vegas and five locations in New York City, Payard has built an empire and made a name for himself as the king of the macaron.

Macarons are almond meringue sandwich cookies filled with buttercream or jam, and are all the rave among those who want a sophisticated hand-sized dessert. (Be careful not to confuse the macaron with the coconut confection macaroons.)

The continued obsession with cupcakes has sparked its near ubiquitousness, a chain of bakeries, reality shows (think “D.C. Cupcakes” and “Cupcake Wars”) and even some trash talk about why macarons should be treasured over one of America's sweetest comfort foods.

In fact, Payard is so passionate about macarons he's one of the organizers of the annual Macaron Day in New York City to celebrate the beloved cookies.a

But while people may debating whether the macaron is the new cupcake for years to come, Payard knows that sweet treats aren't the only thing that satisfy. At his newly-opened New York City flagship store FP Patisserie, Payard is serving up sweet and savory treats alike.

“I try to bring the pastry shop label as well as you have in Paris because everyone says, ‘Oh, I love Paris,’ and my idea was to bring Paris to New York and to show France that we can do even better than the French,” Payard told FoxNews.com’s Kitchen Superstars.

Payard, a third generation French pastry chef, came to the U.S. in 1990 with a desire to learn English. He fell in love with New York City.

“I think after six months if you like New York, you will stay in New York,” Payard said. “New York is the land of opportunity.”

After working in some of New York’s most acclaimed restaurants, including Le Bernadin and Daniel, and earning a James Beard Foundation Award for Pastry Chef of the Year in 1995, Payard sought to open a restaurant of his own. He opened his first bistro in 1990.

Since then, Payard has expanded to 13 locations across the world, including five in New York City. For his newest restaurant, Payard returned to New York’s Upper East Side – the same neighborhood where he opened his first restaurant.

FP Patisserie is filled with neatly-stacked macaron towers and glass cases filled with beautifully decorated cakes and chocolates. The macarons, which Payard is best known for, come in a variety of colors and flavors. Payard is also offering traditional French fare, like a crispy Croque Monsieur sandwich.

“People have a great response to know about the place. It’s very beautiful, elegant,” Payard said. “I think it fits perfectly Third Avenue. My idea is to tell people that you don’t have to be on Madison Avenue anymore. On Third Avenue, we have everything to offer.”