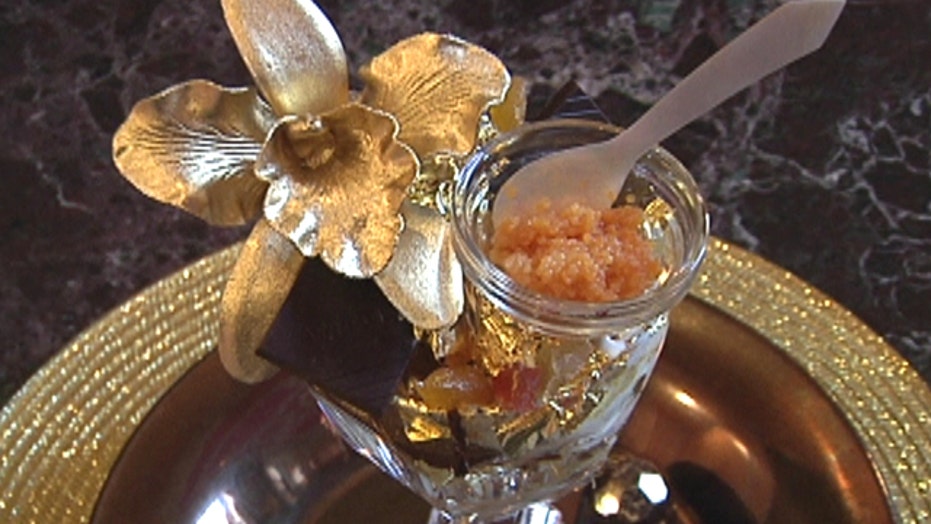 See how to make Golden Opulence, a $1,000 ice cream sundae from Serendipity in New York City.

Still trying to figure out what to give your sweetheart this Valentine's Day?  Why not melt her or his heart with a $1000 sundae.

“It was created in 2004 to celebrate Serendipity’s 50th anniversary.  Traditionally it’s the Golden Anniversary.  The owner Steven Bruce created it with our executive chef,” said Joann Lee, creative ice cream chef for Serendipity 3.

“It starts with the Baccarat Harcourt crystal goblet which retails for $350 and the customer actually gets to take that home with them.  And then we line the goblet with 23K gold leaf,” Lee told FoxNews.com.  The sundae is piled high with Tahitian vanilla ice cream is infused with Madagascar vanilla and then that’s covered in gold leaf. Then comes the chocolate sauce which is a mixture of Amedei Porceleana and Amedei Chuao chocolate, which is the rarest chocolate in the world.  "It’s harvested off the coast of Venezuela," said Lee.

Once that’s all done they add some more gold, for good measure, and then we line the goblet with candied fruits from Faucho, gold dragnets, Amedei Proceleana and chocolate squares.

On the top they place a sugar flower, painted in gold. Every bit of the sundae is edible –even the flower.

Surprisingly, this isn't the restaurant's most expensive dessert. It also sells Frrozen Haute Chocolate, a blend of 28 rare and expensive cocoas. This is served in a goblet, also lined with edible gold, but at the base of the goblet is an 18-karat gold bracelet with 1 carat of white diamonds.

While Golden Opulence is a fraction of the cost, its $1000 price tag is steep to say the least.

“Well, I don’t think it’s an everyday item. You know people aren’t just coming in and having it on their lunch break or something,” said Lee. “It’s for a special occasion and so I think if you want to celebrate something; a moment in your life.  It’s a once in a lifetime opportunity.  And they will, if they have the means, they will splurge and do that for themselves and we’re happy to celebrate with them.”

According to Lee, the golden sundae is most popular on romantic occasions like Valentine’s Day.

“There’s been a lot of proposals; a lot of dates, a lot of celebrations.”

If you can’t blow a thousand bucks on a golden encrusted sundae this Valentine's Day, you can always go for the traditional one that sells for $9.50.  It will probably be just as delicious --without buyer’s remorse.