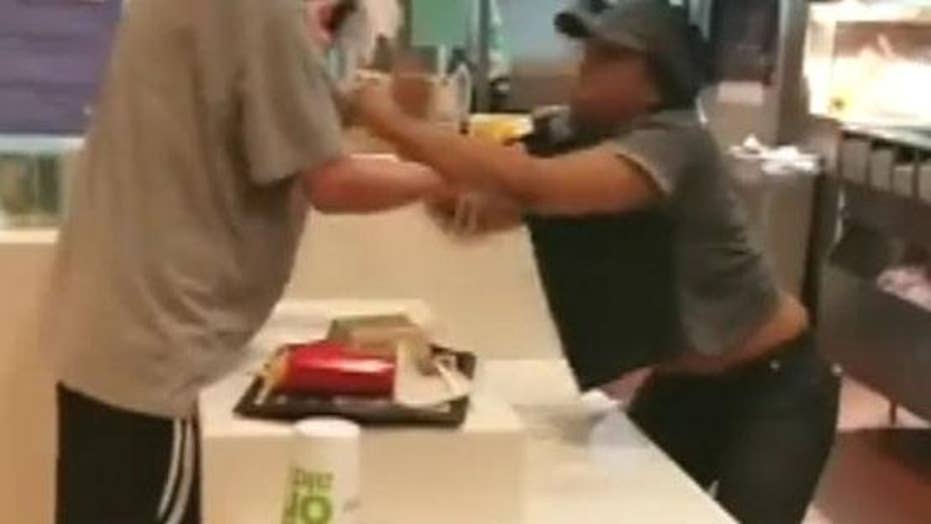 Cellphone footage shows a customer reaching across the counter to assault an employee inside a McDonalds restaurant.

New Year’s Eve didn’t go so well for these people.

A fight broke out between a female McDonald's employee and a male customer at a location in St. Petersburg, Fla., around 6:50 p.m. Monday night, WFLA reported.

In a viral video of the incident, a man identified as Daniel Taylor is seen grabbing Yasmine James by the shirt with both hands and pulling her toward him. She then starts punching him as he holds on. The two go at it for about 20 seconds before the other employees intervene.

Taylor was escorted out of the restaurant and police were called to the scene. On his way out the door, he kicked another employee in the stomach.

He was arrested on two counts of simple battery.

FAMILY OF NINE TRAVELS THE COUNTRY IN A CONVERTED SCHOOL BUS, 'UNSCHOOLS' KIDS ON THE ROAD

Brenda Biandudi, the customer who filmed the altercation, later confirmed to Buzzfeed News that the fight began over a lack of straws on display at the counter.

"He yelled at the employees, 'There's no drinking straws here, it looks like someone is not doing their job,'" she said.

Biandudi said James tried telling Taylor that a new law prevented leaving straws out for customers — the city voted to ban plastic straws entirely by 2020 in December, but currently allows establishments to provide them to customers who request straws specifically, per The Tampa Bay Times — but Taylor did not believe her.

"The voices were escalating, they started swearing at each other," Biandudi said.

McDonald’s released the following statement to WFLA: “Our highest priority is always the safety and well-being of our employees and customers at our restaurants. We have been in contact with the police department and are fully cooperating with their investigation.”