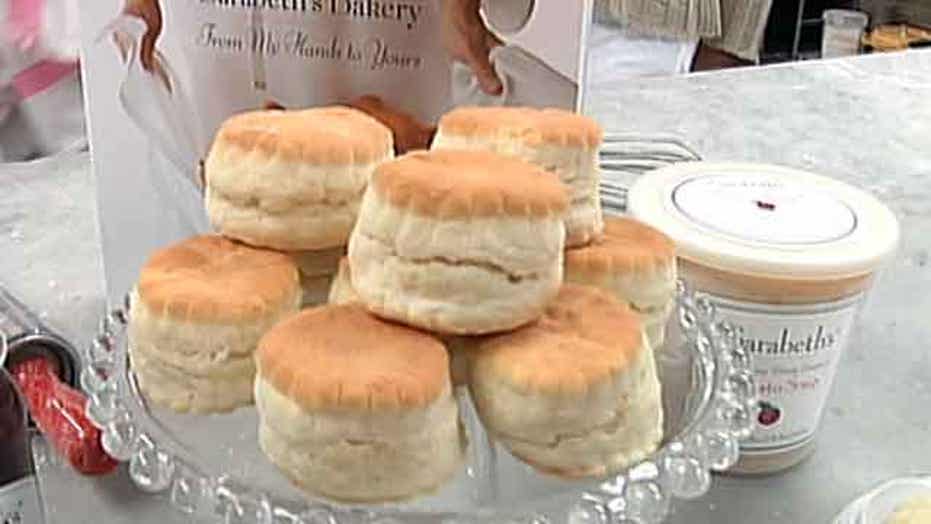 Sarabeth Levine, the maverick that molded her orange-apricot marmalade into a successful restaurant empire, shows Kitchen Superstars how to make her famed biscuits.

Her world-renowned orange-apricot marmalade is so good, fans are known to consume half a jar just sitting in front of the TV. But why stop at jam?

Sarabeth Levine knew once her famous marmalade went viral, she had to do more.

“It’s like that book, ‘When you give a pig a pancake, he’s going to ask for maple syrup.’ Well, when you give them jams and beautiful baked goods, they want breakfast and after breakfast, you need a restaurant,” Levine told Foxnews.com’s Kitchen Superstars.

And so Sarabeth’s was born – the first restaurant opened in New York City in 1985 and now there are ten Sarabeth’s restaurants across New York, New Jersey, in the Florida Keys and even a new location in Tokyo.

Sarabeth’s restaurants are known for serving comfort food, with a focus on breakfast.

“I think I put breakfast on the map,” said Levine. “People weren’t making breakfast 30 years ago the way I made breakfast – oatmeal in a double boiler, Popeye eggs. It moved into lunch and dinners, and dinners are like this well-kept secret. People don’t realize that we make great dinner.”

But nothing is better than her orange-apricot marmalade, which has won several awards (and the praise of notorious food critic Gael Greene). The marmalade is made with fresh, hand-cut oranges and tiny pieces of orange peel.

“It’s not overly sweet,” Levine said. “This is my favorite thing on the planet.”

Though Levine is almost 70-years-old, she has no plans to slow down. She and her husband Bill, who also acts as her business partner, are constantly looking for ways to keep evolving and creating.

“My mother always said, ‘don’t stop moving. Once you stop moving, you’re finished.’ And I think about that,” Levine said. “I don’t feel 70. I’m faster than half the people here.”

Don’t fret if you don’t live near a Sarabeth’s restaurant. Her marmalade, and 14 other flavors of marmalade and preserves, is available for purchase through her online store, along with cookies, cakes and Sarabeth’s famous tomato soup.

Levine is busy expanding her online product empire and is now working on a pancake mix to share with the public. Her recipes can also be found in her cookbook, Sarabeth’s Bakery, From My Hands to Yours.

“We have this line we once said: If Sarabeth were your mother, you’d come home for dinner every night.”