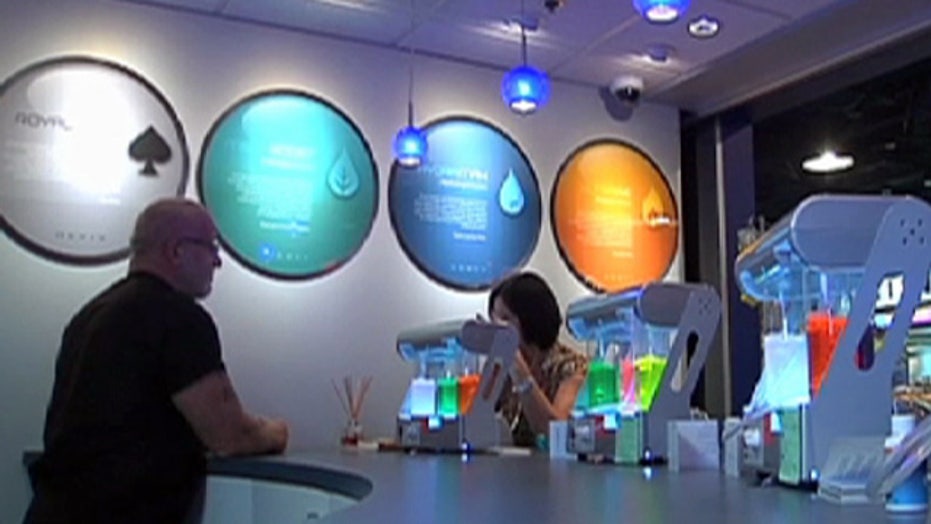 A new, alternative hangover remedy promises to soothe your holiday hang over.

Holiday parties are around the corner and so are the dreadful hangovers that typically come with them.

However, in Las Vegas --the city known for its late-night parties- there’s an alternative cure for hangovers.

For around $100 and in under 30 minutes, the bar promises to soothe hung over, jet-lagged or just rundown customers with a unique treatment: they’re hooked up to an IV bag full of their choice of vitamins and anti-inflammatory.  Or, for customers who are afraid of needles, a simple shot of B12 and oxygen can make most feel like themselves again in no time.

The treatment is supposed to ease pain and give patients a burst of energy that can last for up to two weeks.

Deborah Thorp flew from Italy to Vegas for her brother’s wedding weekend. “I was very hung over this morning to say the least,” Thorp told FoxNews.com.

In Vegas for just three days, Thorp didn’t want to waste time on a hangover.

“Normally I would be laying in bed now for half the day,” she said.

Thorp took a shot of B12 and is hooked up to an oxygen tank at the REVIV Bar at the MGM Grand Hotel & Casino. Her headache seemed to fade away.

Dr. Andrew Garff is a co-owner and one of the on-site physicians who oversees the procedures.

“People are up, walking out, I’m not going to say some are skipping out, though some actually have,” Garff said.

Garff says it's a safe procedure and stresses a sterile environment.

“If a needle is going in your arm you should know that the needle is exactly being tossed away and never being recycled,” Garff said. “So, we do everything by the book.”

Though the procedures carry minimal health risks, the doctor screens every customer.  Customers must answer an extensive list of questions and cannot purchase a treatment if they are drunk or in immediate need of medical attention.

On a busy day, the REVIV bar sees up to 100 customers.

“It’s been refreshing for us because it’s what we want to do. We want to bring health and wellness to everyone,” Garff said.

Besides Les Vegas, REVIV has a location in Miami Beach and more locations are planned for places like New York, California, even Europe.

That’s some invigorating news for customers like Thorp, who says its money well spent.

“This is a better use of money than any gamble you’ll ever do,” she said.