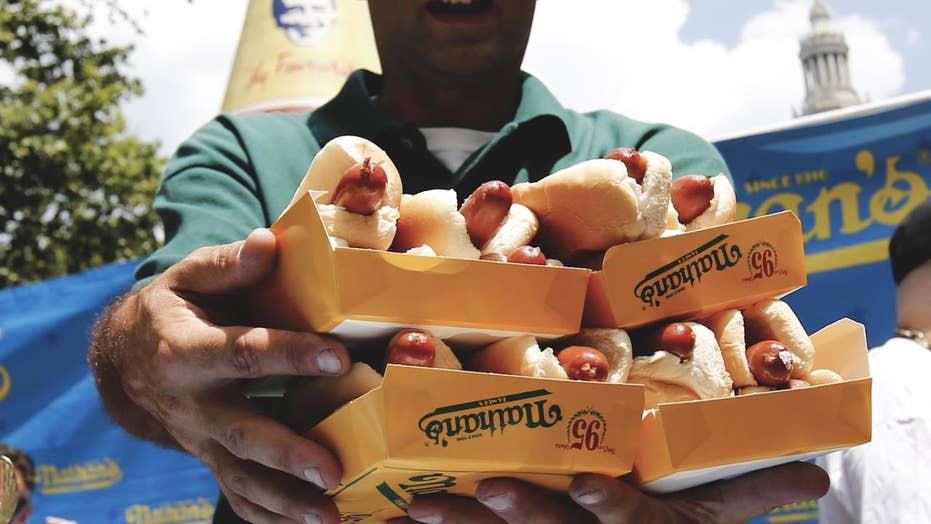 Hot dogs: How America lost and regained its national pride

It’s universally known that many Americans love a good hot dog in the summertime.

That’s why George Shay, the Chairman of Major League Eating, tells Fox News that in 2001, when Takeru Kobayashi took the Famous Nathan’s Hot Dog Eating Contest Mustard Belt back to Japan, it was “in many ways a black eye on our nation and I feel that it affected the national mood.”

5 SECRETS ALL COSTCO SHOPPERS SHOULD KNOW

On top of that, it’s also universally known that Americans love a good underdog story.

The Famous Nathan’s Hot Dog Eating Contest at New York’s Coney Island has become not only a Fourth of July staple, but also an American staple. Shay, who is the announcer during the competition, gave Fox News a history lesson on the iconic contest.

It all began in 1916, when Nathan’s hot dog stand opened for the first time at the corner of Surf and Stilwell in Coney Island.

“James Mullen and two other immigrants came together and decided that the person who could eat the most hot dogs and buns would be the most American,” explains Shay. “So, they did that, Mullen won, and he goes down in history as the first winner of the contest.”

The real turning-point of the contest, however, came when Kobayashi demolished 50 hot dogs. He brought a new style of eating known as “Tokyo style” to the competition too, which means he separates the dog from the bun.

“Kobayashi put two hot dogs in his bun, two hot dogs in his mouth, — and while he was eating those, he put more in. It was almost a conveyer belt. It was like a Henry Ford moment in competitive eating. And obviously that revolutionized the sport,” Shay said.

To learn more about Joey Chestnut’s style of eating, and to find out more about the history of the Famous Nathan’s Hot Dog Eating Contest, check out Fox News' exclusive interview with Shay above.