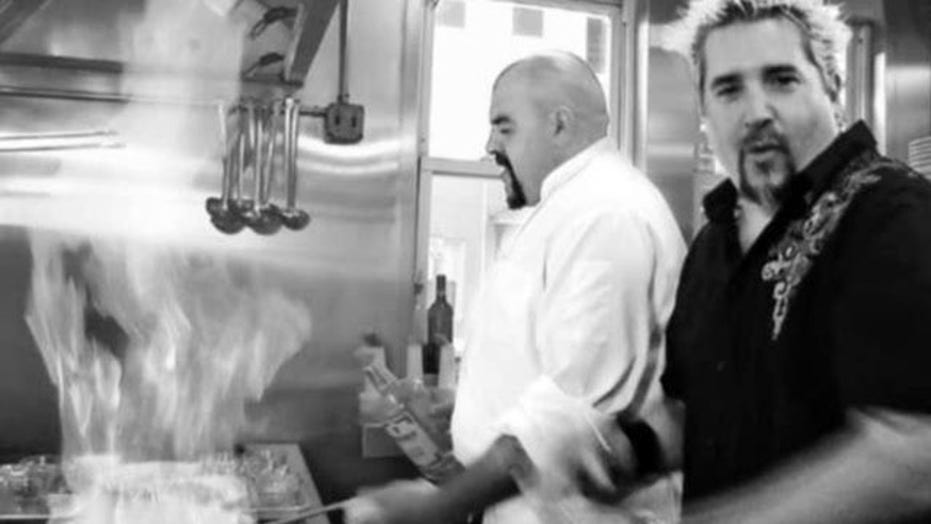 NEW YORK – Guy Fieri has just one thing to say to his critics: “It’s seven months later. I’m having a good time!”

Indeed, seven months have passed since food critic Pete Wells wrote a scathing review of Guy’s food in the New York Times. But Guy isn’t sweating it. He just released his third book based on his hit Food Network show “Diners, Drive-Ins, and Dives,” and it’s sure to give fans something new to sink their teeth into.

“I remember when we started to do one. I’m like, well they see the show, why do they want the book?” Fieri told FoxNews.com. “But…I’ve tried to do it in a way that they’re going to be able to use it even more as a resource.”

The latest book, “Diners, Drive-Ins, and Dives: The Funky Finds in Flavortown,” includes behind-the-scenes stories from Guy’s travels, as well as insight from “The Triple D Krew.”

“It’s not just relying on what they saw in the show. It’s really getting an in-depth perspective,” said Fieri. “And now with all of the Krew writing their little tidbits – it’s hysterical.”

Above all else, the book is a cookbook, filled with recipes from the road. Most of the recipes are for comfort classics, like Guinness Beef Stew from Culhane’s Irish Pub and Blueberry Goat Cheese Pie from the 3 Sisters Café. All of the recipes have one thing in common – they’re funky.

“I say it all the time, if it’s funky, I’ll find it. If there’s a character in the room, I’ll find ‘em. That’s just how my life’s always been,” said Fieri. “The only time it doesn’t sound right is when someone says, ‘Man, that smells funky!’ So it’s not to be used in the context of how something smells. But it’s a fun word, it’s a jovial word.”

Funky is just one of the terms Fieri uses to describe the food in his new book. Some of his other descriptions are, well, more enthusiastic.

In one instance, Fieri declares a dish of fried green tomatoes a “symposium of flavor.”

And, “his seafood is so fresh it’ll slap ya.”

And, “[They] make a porchetta that you won’t forgetta.”

Besides the flashy descriptions of “Flavortown” food, Fieri continues his streak of creating new words like “meltification machine,” “kulinary gangsta,” and “McMagic” vs. “McTragic.”

Fans are sure to enjoy the book. As for the critics, you have to hand it to Guy – like his food, he’s pretty funky.