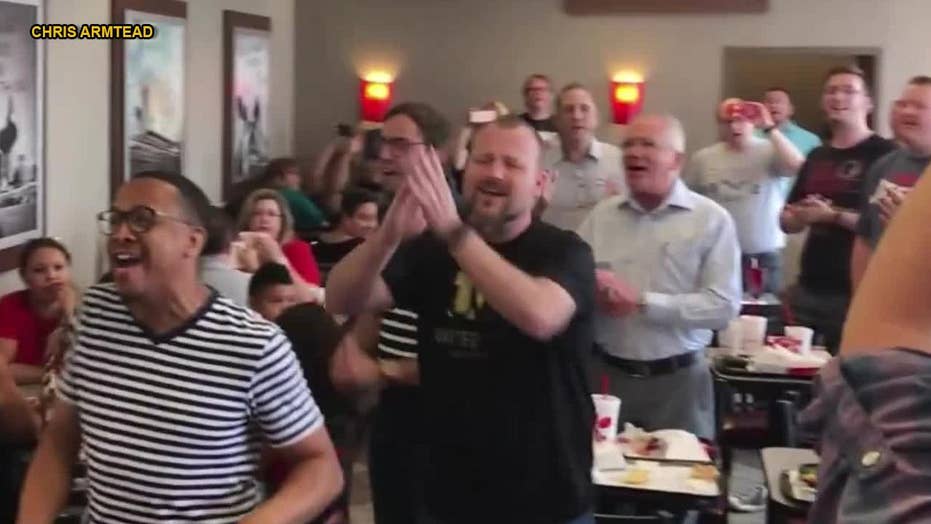 A group of a cappella singers at a Chick-fil-A in Nashville surprised onlookers by breaking out in song, and footage of the uplifting moment is now going viral.

A group of a cappella singers at a Chick-fil-A in Nashville surprised onlookers by breaking out in song last Saturday, and footage of the uplifting moment is now going viral on Facebook.

Chris Armstead, of Atlanta, told Fox 5 that the singers came from all over the world, as they were all attending a religious conference in the area when they decided to bring their talents over to the nearby restaurant.

"The first group, including the leader, began the flash mob by standing up to start the song at their table, and then the other groups stood in succession at their tables/booths to join into the song at predefined times until all 60-plus guys were singing the song," said Armstead.

Soon enough, nearly everyone in the restaurant was on their feet, either singing, clapping along, or just watching the scene unfold. And at the end of the song — a harmony-packed rendition of Hezekiah Walker's "Every Praise” — the room fills with applause.

'PIONEER WOMAN' DOING SOMETHING ODD FOR NEXT COOKBOOK

Armstead said some of the customers and employees, too, had joined in to sing when they recognized the song.

Footage of the flash mob, uploaded to Armstead’s Facebook page, has since racked up nearly 1 million views, with commenters praising the fun moment.

“Absolutely love this!” one woman wrote.

“Praise the Lord!!! Wonderful display of worship,” added another.

Armstead, an employee at Children’s Healthcare of Atlanta, said the reaction is enough to inspire a possible encore in his hometown.

"Maybe we'll try to do some flash mobs at local Chick-fil-A locations here in Atlanta,” he laughed.