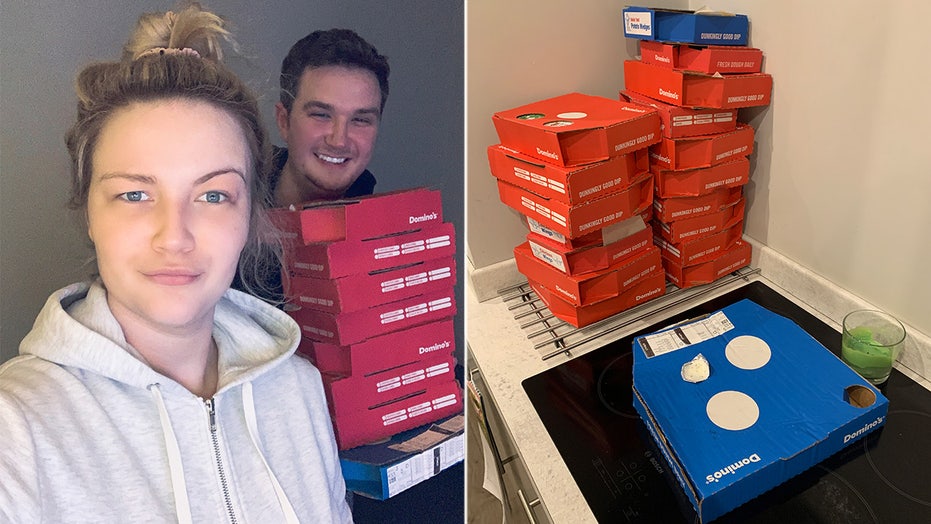 When you’re drunk, there’s no such thing as “too much fast junk food.”

An apparently inebriated man in England recently made headlines for ordering Domino's — or rather, a whole lot of Domino's. According to his girlfriend, a drunken misunderstanding led him to send a massive amount of chicken to their home.

“He told me there [were] at least 15 boxes of sides and I started panicking, thinking, ‘I hope he’s paid,’ because I only had [$25] cash on me,” Hannah Eddon said, according to The Sun. “I had to get the delivery guy to help me bring it all into the kitchen. There was so much of it, I was so embarrassed.” (Caters News Agency)

Lee Rumney had gone out drinking with his friends to celebrate the birth of his son, The Sun reports. After asking his girlfriend, Hannah Eddon (who was home and sober), to order him some Dominos, she told him she was having trouble with the app. So, she says, he decided to order himself on his way home.

This was a mistake.

According to The Sun, Eddon said that when the pizza guy showed up with the order, he said, “There’s quite a lot here, he must be having a party.”

“He told me there [were] at least 15 boxes of sides and I started panicking, thinking, ‘I hope he’s paid,’ because I only had 20 pounds ($25) on me,” she said. “I had to get the delivery guy to help me bring it all into the kitchen. There was so much of it, I was so embarrassed.”

In his seemingly drunken state, Lee Rumney ended up ordering 177 pounds ($226) worth of food from Dominos. (Caters News Agency)

Rumney, who had returned home before the food arrived, had gone upstairs to the bedroom. By the time it was delivered, Eddon said that he had already passed out on the bed.

“I just stood there with all these boxes and the smell of chicken wafting through the house, I was fuming,” she said. “He wasn’t texting in full English and when he came through the door he was crashing into all the doors and bouncing from wall to wall.”

Eddon also explained that Rumney couldn’t remember a thing in the order. “It’s a good [thing] I’ve got a sense of humor, and in the end he was the one who felt stupid,” she said. “He was absolutely devastated when I told him he’d spent 177 pounds on Domino’s.”