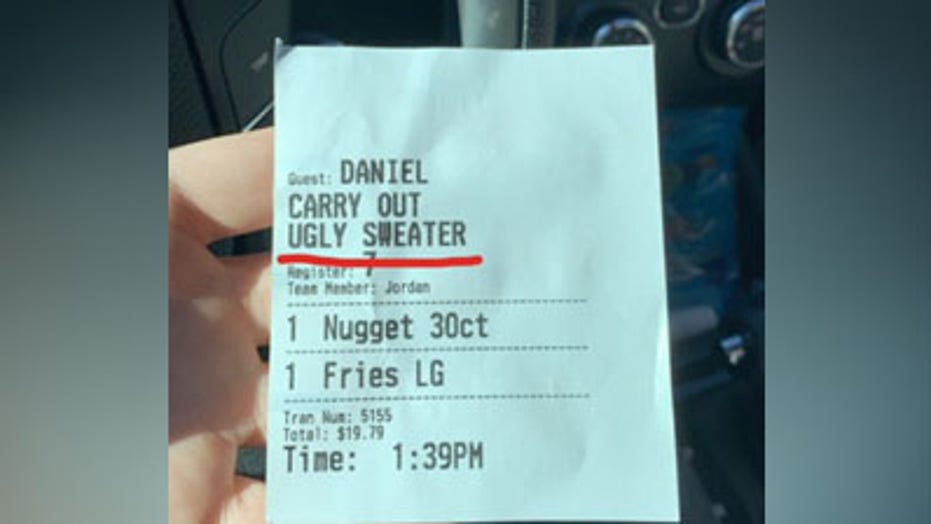 This guy just wanted some nuggets, not fashion advice.

A Chick-fil-A customer in Arizona was accidentally handed a take-out ticket identifying him as the customer wearing the “ugly sweater.” Amused by the comment, he shared a photo of the ticket to social media, unaware of the reaction it was going to get.

Daniel Graham was amused to see that a Chick-fil-A worker had described him as "ugly sweater." (Twitter/Zin_Zaddy)

Daniel Graham, a musician who performs under the name Zinfandel Zaddy, posted the pictures to his Twitter account. One of the photos shows the take-out ticket, which reveals that Graham ordered a 30-count order of Chick-fil-A nuggets and a large side of fries.

Under his name, a description was added reading “ugly sweater.”

“It was not my pleasure to eat Chick-fil-A today," Graham jokingly captioned the photo. After posting the initial tweet, he also added, “I’m not mad but I am sad and I will take reparations in free chicken sandwiches.”

Graham says that he found the situation amusing and that he doesn't think the cashier should've lost their job. (Twitter/Zin_Zaddy)

Graham confirmed to Fox News that he “wasn’t offended in the least” and that he found “the situation funny.” He also posted a clarification on Twitter, explaining that the ticket wasn’t a receipt, but “a takeout ticket they use to identify the customer” and that it was given to him by accident.

Unfortunately, it seems that management at Chick-fil-A wasn’t laughing.

Graham spoke with Fox News, saying that the cashier who had served him had been fired from his job.

“I felt very bad because, like I said, that was never my intention,” he said. “I called the manager of the store and talked to them asking for them to please reconsider, and explained that again, I wasn't offended in any way, I thought it was cute and fun and I had the idea to make a tweet about it, but at no point was there malicious intent. They offered me some free stuff but I told them I would rather the cashier get to keep his job than me get free stuff. The manager I spoke to was very vague and I feel like me saying that didn't even really make a difference, though I wish it had.”

Fox News reached out to Chick-fil-A, but the company did not immediately respond.