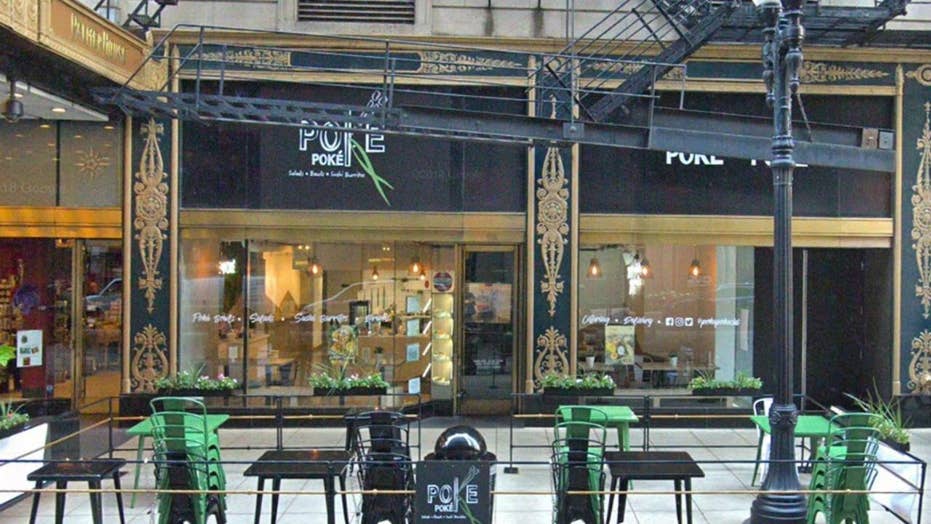 A Chicago restaurant manager has been suspended for throwing a chair at a black teenagers.

A Chicago restaurant manager has been suspended after saying that he got "defensive" at the sight of black men, after reportedly throwing a chair at a teenage customer.

Restaurant manager Matthew Fezzey got visibly fired up at the sight of Johnson and his friends, yelling “I’ll kick your a—,“ and “This is my place of business," The Washington Post reports.

MARIO BATALI LIKELY NOT TO BE CHARGED FOR TWO ALLEGED SEXUAL ASSAULT CASES IN NYC: REPORT

Johnson claims Fezzey proceeded to swing a chair at him, making contact with his arm. Johnson proceeded to call the police and began filming the scene.

In the minute-long clip, which has since gone viral on Facebook, the Poke Poke manager does not appear to deny throwing a chair at Johnson. Instead, he counters that he’s “fought black guys” at the restaurant in recent days, for what he claims were previous attempts at criminal actions. He added that he’s "not trying to be racist.”

“When you guys come in here I get really f---ing defensive. Really defensive. Cause I have to fight them off all the time.”

“But sir, you threw a chair at me,” Johnson responds. “I’m not those guys.”

In the days since, Johnson’s attorney, Anish Parikh, has said that the teen plans to take legal action, and that management for Poke Poke “supports the teen’s assertion that he was an innocent victim,” as per the Post. No charges have yet been filed.

“I was super shocked, I was scared, thinking: ‘Is this is really happening right now?’ Johnson told the outlet. “I looked into his eyes, and they were super furious.”

Reps for Poke Poke have issued a statement in response to the incident, chastising “discrimination or racism” of any kind.

“First, we want to be absolutely clear that we do not tolerate discrimination or racism of any kind. Diversity, inclusion and compassion are principles we care deeply about, and those values embody who we are as a Chicago-bred, minority-owned and operated establishment,” the chain wrote in an Instagram post. “We are taking this matter very seriously. Racism has no place in today's society and no one should ever be judged by the color of their skin.”

“There are no excuses for what happened to Kyle and for that we apologize.”

During the ordeal, Johnson said that he tapped into “meditation and prayer” to stay calm. Johnson, a senior at Innovations High School, hopes to be social worker, the Post reports.