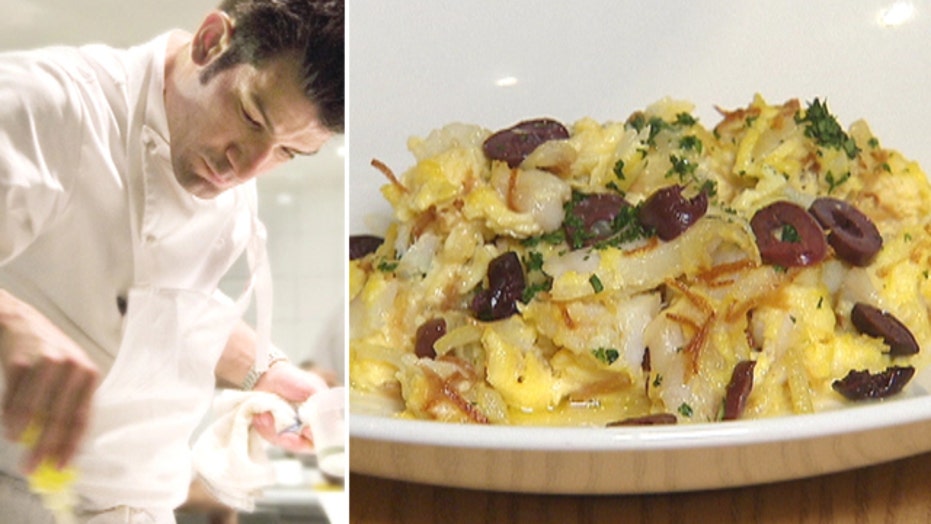 Chef shows off a dish that celebrates his heritage: cod with scrambled eggs

When Chef George Mendes was building Aldea, visions of a glamorous New York City Michelin-rated dining hotspot were the furthest thing from his mind.

"I started building Aldea, it was a construction site and it was a lot of stone and dust and a lot of blue collar workers in here," Mendes said. "It took a while for me to name the restaurant and that name inspired me, Aldea.”

Born to Portuguese parents, that inspiration came deep from his family roots, and the name he picked was drawn from a poem written by Mendes’ grandfather.

“Aldea is a Portuguese word that means village or countryside and it’s actually inspired by a poem that my grandfather wrote in 1977 when I was a kid first visiting Portugal,” Mendes told FoxNews.com’s Kitchen Superstars. “It was a poem about the hard knocks of life and farming."

Running a restaurant isn't easily, especially in the uber-competitive New York environment.  But Mendes must being doing something right.  After opening in 2009, Aldea, which offers seasonal cuisine with an international spin, earned a Michelin star in 2011.

“I like to define my cooking style as Portuguese-inspired, but also globally influenced,” said Mendes.

But despite praise from critics and patrons alike, Mendes says it’s hard to please his toughest critics: his parents.

“At the beginning, they were very pensive,” Mendes said. “My mom would come in and be like, ‘That’s not how we do the baby goat!’" he said. "Four years later, I think she’s given me two stars.”

Mendes says he plans to continue pushing Aldea forward to make it a better restaurant, and he hopes to eventually build a second restaurant that still stays true to his Portuguese heritage.

“It’s very gratifying, especially when you achieve the dream of running your own restaurant,” said Mendes. “Having people come in, eat your food and leave happy, entertained and then come back again – that’s the best feeling ever.”