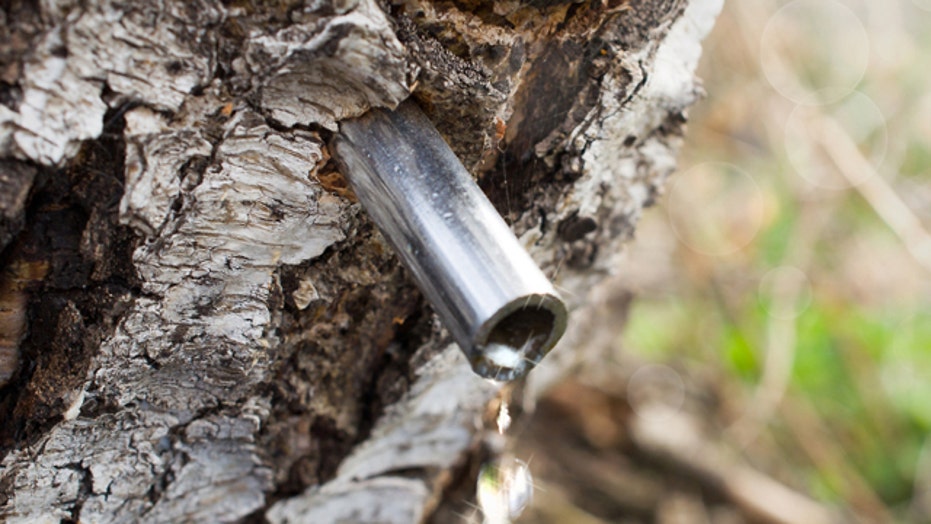 Drinking water from a tree

The newest thirst quencher is water from birch trees.

It seems like only yesterday, yogis and fitness devotees were singing the praises of electrolyte-rich coconut water -- helping to turn the market into a $1 billion industry.

But now there's a new super-drink is hitting store shelves.

Birch tree water, consumed by many in Baltic nations for centuries, is rich in minerals like potassium, zinc and magnesium and is lauded for its healing and detoxifying properties.  The process for collecting birch water is similar to that of maple syrup, where trees are tapped to extract the tree’s liquid --and can only be done in the spring right after winter’s frost wears off.

Previously only available in European countries such as Russia and the Ukraine, birch tree water is now for sale in the U.S. via two companies. Sealand Birk is a Danish company that offers a variety of flavors like Blueberry, Elderflower and Ginger & Lime. Byarozavik-- which translates to “birch tree water” in Slavic languages-- is based in the U.S. Both companies tap trees throughout Northern Europe for this “vitality” drink.

“People drink birch water for a lot of different reasons but ultimately we think it’s just a great source of natural hydration,” Valery Jerdes, partner of Goodness in Bottle that produces Byarozavik. “We’ve had athletes who say it really improves their endurance and overall performance.”

Birch tree water also has xylitol, a naturally occurring sugar alcohol which the American Dental Association says helps fight tooth decay. Byarozavik also adds organic cane sugar, which the company says is a preservative to extend the product's shelf life. In its natural state, birch tree water lasts two days before starting to spoil, the company says. Both Sealand and Byarozavik are USDA certified organic and say they have developed proprietary pasteurization bottling processes to extend shelf life up to a year.

“Our birch water is ideal for people watching their weight and sugar intake,” Christine Stavropoulos, a spokeswoman for Sealand Birk told us by email. She says that their beverage can help rev up a sluggish metabolism by detoxifying the liver and kidneys.

Both products have about the same calories as coconut water and grams of sugar per serving— about 60 and between 9 and 12 grams respectively.

So how does it taste?  We gave it a try.

The plain or "original" flavor has a piney aftertaste and has the same mouth-feel as regular water.  So you can pretty much convince yourself you're drinking H20, unlike coconut water which has a distinct coconut flavor.

We were a little worried that it would taste like maple sap, but its light sweetness is refreshingly understated, especially when cold.

So if you're sick of swigging coconut water, birch tree water may be your new favorite health drink-- until the next one comes along.