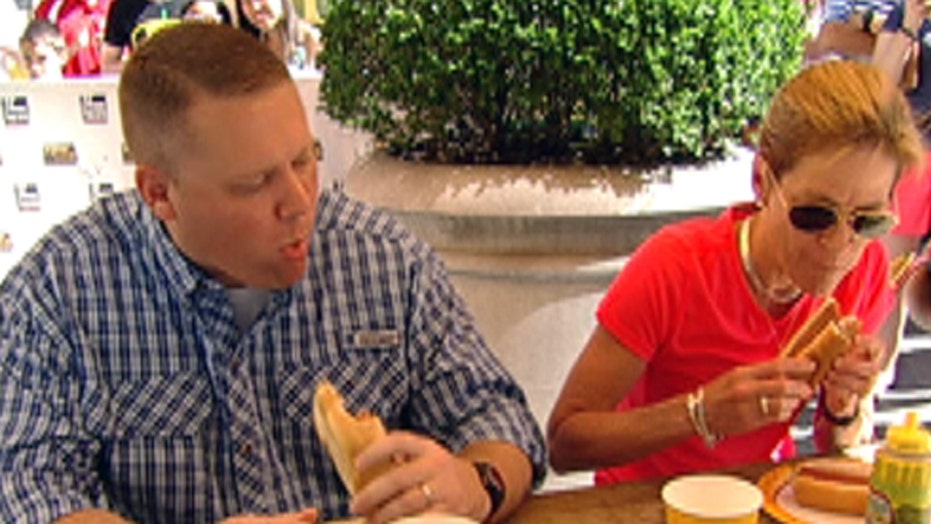 Take a minute to digest this: Joey Chestnut ate 70 hot dogs in 10 minutes on the Fourth of July.

And if that isn’t insane enough for you, chew on this: One week later, also in 10 minutes, he scarfed down 194 chicken wings.

Chestnut is the reigning champion of the most famous eating competition in the U.S., the Nathan's Famous International Hot Dog Eating Contest, held every Independence Day at Coney Island in Brooklyn, New York. But for the man they call “Jaws,” Nathan’s is just an appetizer.

The public’s fascination with eating competitions isn’t new. To be frank, people have been eating this stuff up for years-- it's just gotten more extreme overtime. The Nathan’s competition dates back to 1916, but its popularity skyrocketed after the most celebrated competitive eater in history, Takeru (Kobi) Kobayashi of Japan, doubled the world record in 2001. The diminutive 5-foot-8, 135-pound former college student became an overnight sensation when he ate 50 hot dogs in 12 minutes.

Fifteen years later, there is a competitive eating season, with no rest for the bloated, and August and September are like the playoffs. Over eight weeks, competitors eat their way to titles in categories that include tacos, chicken spiedies, ribs, tamales and pork sandwiches. Most cash prizes range between $1,000 and $7,000. Nathan’s awards $20,000 to the male and female champions.

Though it’s a male-dominated sport, competitive eating has started to attract women like Molly Schuyler, a 36-year-old, 125-pound mother of four from Nebraska. “I only compete in coed events,” she says. “People usually underestimate the girls, but I’ve turned heads. I don’t think gender dictates how well you do.”

Schuyler who has been perfecting her craft since 2012, has won coed titles for consuming nearly 400 chicken wings, 5 pounds of bacon, 26 quarter-pound hamburgers and, in the competition that cemented her status on the national circuit, three 72-ounce steak dinners.

Kobayashi, who prefers sushi to steak, thinks about his time and pace constantly while eating. Minutes before competing, he primes his stomach by drinking three gallons of water in 90 seconds. His mantra is mind over matter.

“Think creatively,” says the 38-year-old, who now lives in New York. “Every person has a different body and must find what works for them.”

It was Kobi’s revolutionary approach — eating the hot dog and the water-soaked bun separately — that led him to win the 2001 Nathan’s competition and made him a subject of "Think Like a Freak," a follow-up book to the best-selling "Freakonomics." Despite his success, Kobi admits his biggest fear is injury and disease.

Dr. David Nico, author of "Diet Diagnosis," is a former competitive bodybuilder who used to bulk up on Double Whoppers. With an extremely low body fat percentage, the then 21-year-old was the poster child for “skinny fat” until he got a wakeup call — chest pains. Now known as Dr. Healthnut, Nico admits it would be fun to see "an occasional competitive juice fest to substitute for the unhealthy eating competitions."

IS THIS THE WORLD'S HEALTHIEST EATING COMPETITION?

“If I take five pounds of green vegetables and blend them with berries, bananas and coconut oil, the amount of food is not going to have the same negative impact on my blood sugar and digestive system as five pounds of hot dogs,” he says.

Nico still cautions that regularly engaging in any type competitive eating contest has the potential to disrupt the normal mind-body balance through overindulging.

Still, those who watched a healthy superfood competition at Taste of Buffalo in July witnessed more angst in the competitors’ faces than what you see when they consume processed foods. Gideon Oji, a 24-year-old former college baseball player who now studies health and fitness, became the first-ever Kale Yeah! champion when he crushed 25-and-a-half bowls of kale in eight minutes. He collected a $2,000 cash payout-- but his bowels probably paid for it later.

There have been no reported cases of death from eating dozens of hot dogs in one sitting, but one was enough to kill a 47-year-old man who choked in a Fourth of July contest in South Dakota in 2014.

Accidental injuries are far more common in the sport. In addition to stomach ruptures, competitive eaters can suffer from cerebral edemas and seizures resulting from the popular training regimen of drinking gallons of water to promote stomach expansion. But the competitors avoid talking about injuries, fearing they might damage the sport’s reputation and their livelihood.

“The social implications are also largely negative,” says Megan R. Williams, a family and obesity physician in Texas. “The U.S. has a huge obesity problem, and these competitions present food as something more than just energy for the body.”

THIS 9-PATTY BURGER CHALLENGE MAY ENDANGER YOUR HEALTH

Dr. Steven Crawford, co-director at The Center for Eating Disorders at Sheppard Pratt, agrees it messes with the mind. “It’s a disordered pattern of eating that can put a genetically vulnerable person at high risk for developing an eating disorder,” he says. Crawford strongly cautions against training to ignore fullness cues and adds that the sport has been linked to laxative abuse.

But for professional eaters who love the sport, the potential glory outweighs the risks.

Randy Santel has racked up food challenge wins in 38 states and 17 countries, but the 29-year-old from St. Louis isn’t your average competitive eater. He just finished a 70-day European tour, but his biggest win will come when he finishes his degree. Santel wants to become a registered dietitian and nutritionist, because competitive eating will never pay his bills.

Even Kobayashi, the Michael Jordan of competitive eating, has a plan B. “If I wasn’t a competitive eater, I’d be an accountant,” he says. “Or I’d work with animals, specifically dogs.”

And not the kind that come wrapped in a bun.