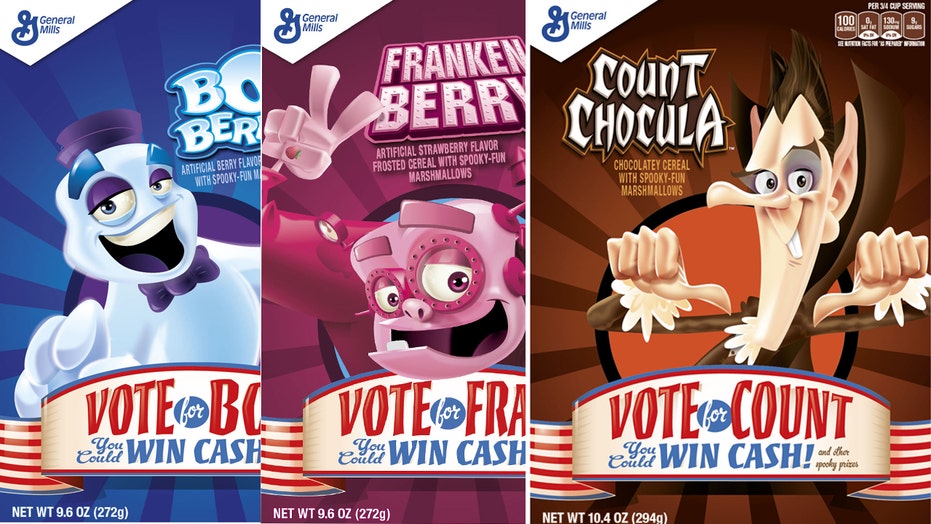 Chew On This: Franken Berry, Count Chocula and Boo Berry monsters are vying for your vote

Who doesn’t love a good bowl of cereal? Whether you like it crunchy or soggy, with or without milk-- or for breakfast, lunch, or dinner-- cereal is still a staple in many Americans' pantries.

To help celebrate National Cereal Day, here are seven things you never knew about some of your favorite cereals:


1. This is America's favorite cereal

West Palm Beach, USA - December 24, 2011: This is a studio shot of a box of Honey Nut Cheerios. Cheerios are a popular American breakfast cereal made from oats and manufactured by General Mills. (iStock)

The cereal had been colored using “Food, Drug and Cosmetics” (FD & C) Red No. 2 and No. 3., which can’t be broken down or fully absorbed by the body. A study conducted by researchers from the School of Medicine at the University of Maryland Baltimore in 1972 fully explained the mysterious “Franken Berry Stool” incident. Thankfully, no other symptoms accompanied the pink poop.

Although most just call him Lucky, the Lucky Charms' Leprechaun’s full name is “L.C. Leprechaun.”  John Holahan, a product developer for General Mills, created the cereal after experimenting with Cheerios and tiny pieces of Circus Peanuts candy he chopped up.

Of all the original "marbits"-- slang for the tiny marshallow bits-- the pink heart is the only shape that remains in the box today.

4. Who knew there was once a fourth Rice Krispies mascot? Snap! Crackle! Pop! and Pow!

Chico, California, USA - March 11, 2011 : Front view of a 12 OZ blue cardboard box of Kellog's Rice Krispies. Kellog's is headquartered in Battle Creek Michigan, they sell their cereals and convenience foods in over 180 countries around the world. (iStock)

It all began with three little words-- “Snap! Crackle! Pop!” in a print ad that first ran in 1929. The artist behind the famed saying, Vernon Grant, sketched a character for each sound and even referred to the trio as his children.

"Snap!" was the first character to appear on the side of the cereal box and was later joined by his brothers in 1941. "Crackle!" is the middle brother and "Pop!" is the youngest of the three.

"Pow!" had a brief stint in two television commercials in the early 1950s, serving as a spaceman character, though he was never considered an official character.

The Rice Krispies trio remains the first and longest-running cartoon mascots to represent a Kellog’s product.

These sugary little squares, which are actually one of Taylor Swift’s go-to comfort foods were first created in 1984. Cinnamon Toast Crunch aimed to mimic the flavor of the childhood favorite treat-- cinnamon sugar toast. Before the mascot got a major makeover in 2000, “Chef Wendell” first appeared on the boxes and television commercials in 1987. Today, the mascots are recognized simply as “Crazy Squares.”

Yes, the famous mascot on the box of Cap'n Crunch cereal has a full name. He goes by "Cap'n Horatio Magellan Crunch".

A grand debate has been circling around the internet for years about whether or not the mascot is actually a U.S. Naval Captain-- or just a fraud in a fancy suit. As seen on the box of cereal, the mascot has only three stripes on his uniform which would make him a Commander, not a Captain. In order to be a true Captain, the mascot would need four stripes on his sleeves.