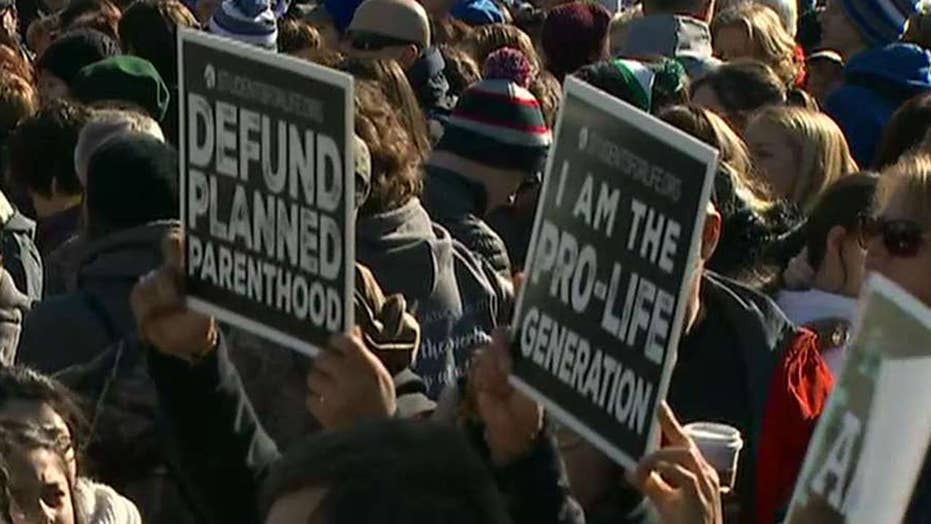 Hundreds of thousands of pro-life activists descend on the nation's capital to walk in the March for Life. And while they come from all over filling up buses and planes, one man literally walked from coast to coast to attend the nation's largest anti-abortion protest Friday.

John Moore, 67, began his nationwide pilgrimage last April in San Francisco and he ended his 8-month, 2,800-mile journey today on the National Mall, joined by thousands of other pro-life supporters. Moore who was joined by his daughter, Laura, who drove and scouted the roads along the way. The trek was about keeping a pledge he made after attending the March for Life for the first time six years ago.

"It's a walk of faith," Moore told Columbia magazine. "I walk pilgrimages to humble myself before God, to be a witness for Christ and to pray for others. I’m not walking across the country for myself or any recognition."

LILA ROSE: HOW THE MARCH FOR LIFE AND THE WOMEN'S MARCH VALUE WOMEN DIFFERENTLY

He said he made a promise to the Knights of Columbus, of which he is a member, to the people at the March for Life, to the unborn children, and to God.

The March for Life celebrated Moore for his "dedication and witness," and all the money he raised along the way is being donated to the Knights of Columbus Ultrasound Initiative.

And it was a promise that took him five years to train for, and he was able to do it because of the success of his family business.

He began on Divine Mercy Sunday, April 8, at the Civic Center Plaza Park in San Francisco, where the Walk for Life West Coast begins, and he walked through Nevada, Utah, Wyoming, Nebraska, Iowa, and Illinois, along the way.

Moore has been surprised by the different reactions he's received along the way, beginning with mostly negative on the West Coast and getting more positive the closer got to the March for Life.

"We’ve had a couple of people stop to talk to us and they’re not religious at all," Laura, Moore's daughter, told the Gallup diocese's paper in May. "They don’t know anything about the March for Life. People will stop and give my dad water, some people will walk with him for as long as they can, some people will give him money. A lot of people tell him how cool they think it is.”

MARCH FOR LIFE: A LOOK AT THE LARGEST PRO-LIFE RALLY IN THE UNITED STATES

He put the rosary, which he said has 61 parts to it, including the beads, crucifix, and centerpiece, on the cross to symbolize the estimated 61 million abortions in the United States since Roe v. Wade. And he prayed along the way.

"It is said that a pilgrim prays with his feet," Moore said. "A few weeks after I started, I realized that I walk about an average of about 2,200 steps each mile, and that comes out to 6.1 million steps across the country. So, every step I take represents 10 lives lost to abortion."