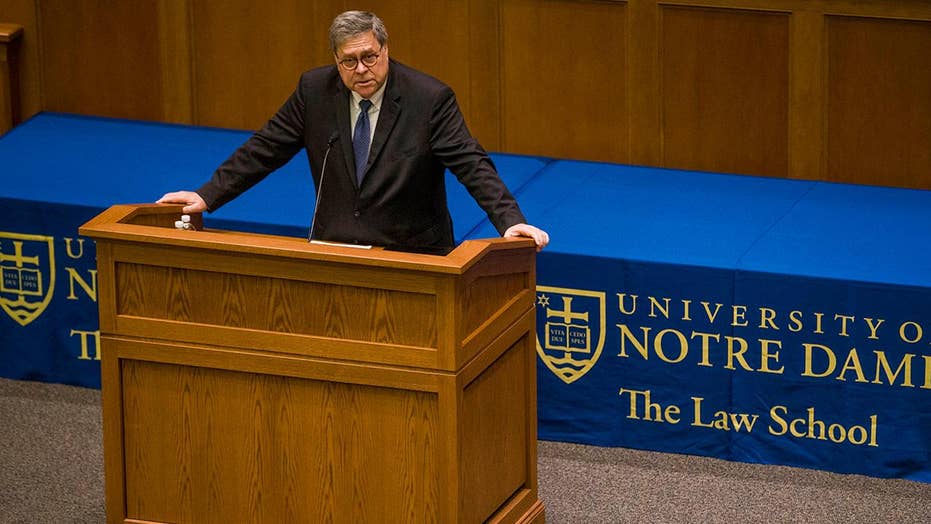 U.S. Attorney general William Barr has come under fire from a liberal Christian group for a speech he made at Notre Dame University Law School. The group claims he violated his oath to defend religious liberty for all Americans.

The group, called Faithful America, said Barr's speech was too focused on Christianity. They've filed a formal complaint with the Justice Department's Office of Professional Responsibility.

Christopher Hale, a former Obama faith adviser, said while he supports the group, he contends they might have gone a bit far.

"I'm friends of Faithful America. They're a good group, but I'm not with them on this," Hale said. "The progressive movement, the left, we oftentimes swing at every pitch. And I do not know why we're going after this, in particular."

During Barr's speech delivered on October 11, he talked about how religion promotes moral discipline and virtue needed to support a free government.

"First, it gives us the right rules to live by. The Founding generation were Christians. They believed that the Judeo-Christian moral system corresponds to the true nature of man," he said. "Those moral precepts start with the two great commandments – to Love God with your whole heart, soul, and mind; and to Love Thy Neighbor as Thyself."

The group labeled Barr's speech "toxic Christian nationalism" and demanded that the DOJ remove the speech from its website and that Barr apologize and give a new speech outlining steps to combat "right-wing attacks on the religious liberty of Muslims, Jews, Sikhs, progressive Christians, American Indians, and atheists."

So far, the DOJ has not responded. But the group claims it's collected more than 14,000 signatures for its petition.

The Rev. Frank Pavone, the founder and national director for Priests for Life, said: "They're talking about the defense of religious liberty. And it seems to me they're taking away some religious liberty from Attorney General Barr. I mean, religious liberty does not mean that everything that everybody says has to be somehow neutral or given equal time to every religion under the sun."

Hale also added that this kind of attack could backfire and bleed over into the Democratic Party.

“If the Democratic Party is made to be the party against God, the godless party, we are going to be in the minority," he said. "We have to be a party that has acceptance of people of all faith and people of no faith.”