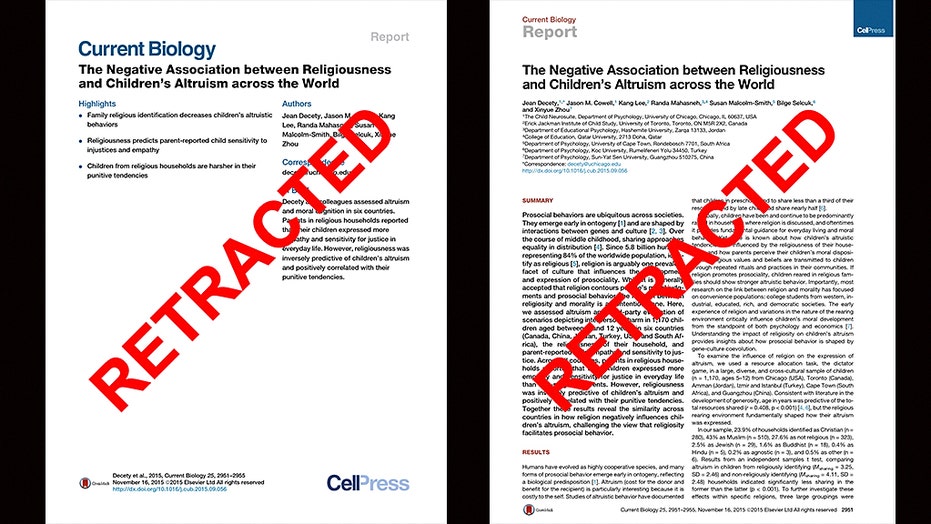 A scholarly scientific article made national headlines in 2015 for showing the negative impact a religious upbringing has on a child's generosity -- except it turns out the opposite is true, and it took years before a retraction was made.

The paper, published in Current Biology in 2015, was picked up by over 80 media outlets, including the Los Angeles Times, The Economist and the Boston Globe, according to Psychology Today.

"Yet another study enthusiastically touted by the elite media has to be retracted by the academic journal that published it," Princeton University professor, Robert P. George, said on Twitter of the new revelation.

The article, now titled: "RETRACTED: The Negative Association between Religiousness and Children’s Altruism across the World," originally claimed "family religious identification decreases children's altruistic behaviors" and "children from religious households are harsher in their punitive tendencies."

"We apologize to the scientific community for any inconvenience caused," Jean Decety, and co-authors said, adding that when they reanalyzed the data to correct the error they found the "country of origin, rather than religious affiliation, is the primary predictor of several of the outcomes."

Two articles, one in Buzzworthy and the other in TruthTheory, reportedly published after the formal retraction, cited the paper stating that religious children were less generous.

Harvard School of Public Health professor, Dr. Tyler VanderWeele, found the opposite to be true in a study for Harvard's Human Flourishing Program.

"The effects of a religious upbringing seemed to contribute to a greater generosity toward others many years later during young adulthood," VanderWeele wrote in a piece for Psychology Today.

His study found that children who attended religious services were more likely to have high levels of volunteering, forgiveness, and a sense of mission, and less likely to encounter depression, drugs, and other risky behaviors.