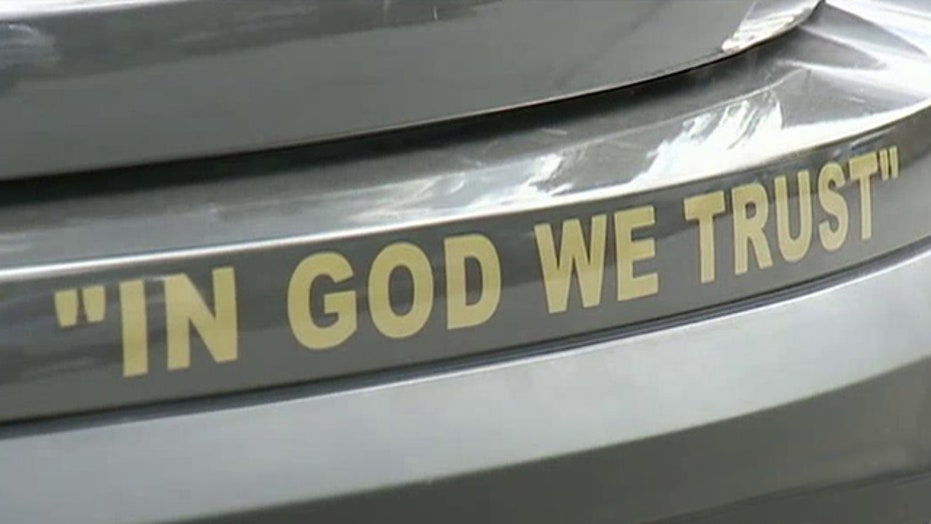 Is 'In God We Trust' offensive?

Minnesota bill allows 'In God We Trust' in schools. Panel debates the uproar over the phrase.

After much controversy, the Bakersfield, Calif., City Council on Wednesday approved a proposal to add “In God We Trust” decals to both police and fire vehicles.

“I love the motto,” said Councilmember Jacquie Sullivan, according to The Bakersfield Californian. “It’s meaningful. It’s powerful. Those words are intended to encourage.”

Sullivan’s non-profit organization, In God We Trust America, has offered to pay for the decals.

“Displaying ‘In God We Trust’ — the official motto of the United States — on Bakersfield Police Department cars is a testament to each officer’s commitment to upholding the rule of law and defending the City of Bakersfield and its residents,” he said in a statement to The Californian.

IS 'IN GOD WE TRUST' OFFENSIVE?

Lawyers for the American Civil Liberties Union showed up at the city council meeting to oppose the proposal, calling it bad public policy.

“Unlike God, police officers are fallible,” ACLU lawyer Jordan Wells said. “Their conduct should be scrutinized by the public, and when they overstep their authority, we must insist on accountability.”

One council member, Andrae Gonzales, said he is Christian but voted against the decals.

“The God I believe in is much bigger than a bumper sticker,” he said.

STEPH CURRY: 'MY FAITH IS TESTED ON THE COURT AS MUCH AS IT IS IN LIFE'

City council members in nearby Delano approved a proposal last month to add “In God We Trust” to police vehicles. The city of Shafter, which borders Bakersfield, is expected to vote on a similar proposal later this month.