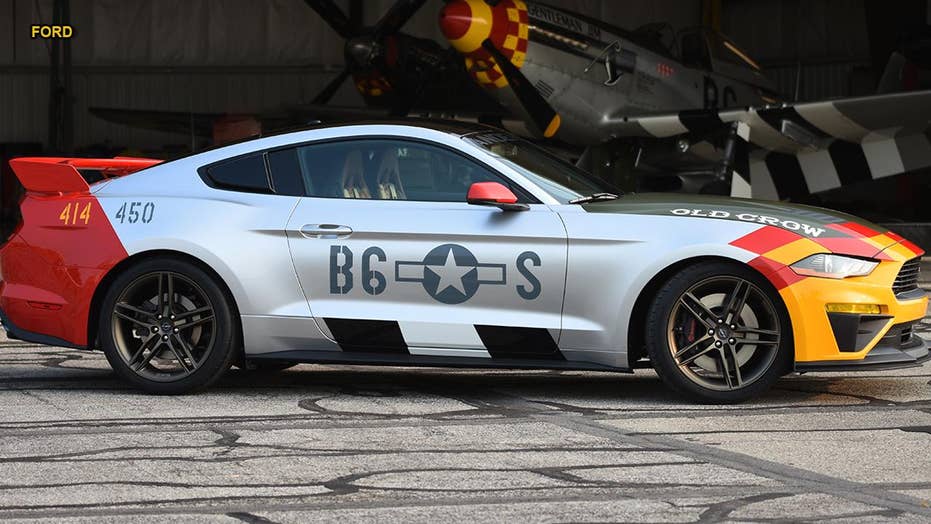 Ford is paying tribute to one of the most decorated American airmen in history, C.E. 'Bud' Anderson, with a custom Mustang featuring a paint scheme designed after the one on his World War 2 P-51 Mustang fighter known as 'Old Crow.' The modified Mustang GT was built by Roush Performance for a charity auction benefiting the education programs of the Experimental Aircraft Association.

A custom Ford Mustang GT built to honor a World War II flying ace was sold at a charity auction for $400,000 on Thursday.

The muscle car was painted in the livery of Old Crow, the P-51 Mustang flown by C.E. Bud Anderson, who was credited with over 16 victories during the war.

Anderson, now 97, had a long career as a military and test pilot, and is considered one of America's greatest aviators. All of the proceeds from the auction held at the Airventure show in Oshkosh, Wis., are earmarked for the Experimental Aircraft Association's educational programs.

The car was the 12th donated to the event by Ford and the sale brings the grand total raised by the auctions to nearly $4 million.