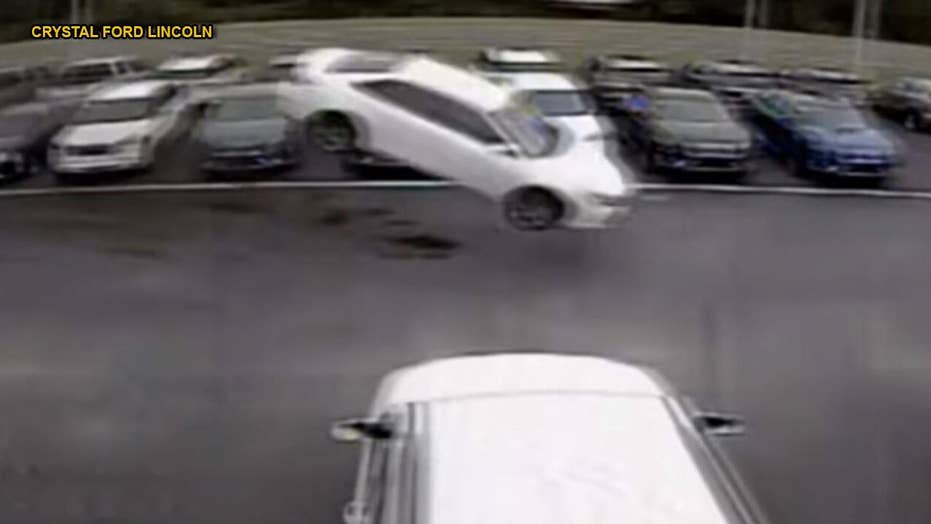 Watch: Toyota Camry launches 139 feet into the air, over two rows of vehicles before landing in parking lot

According to police in Crystal River, Florida, the driver of a white Toyota Camry lost control of the vehicle causing it to jump over two rows of cars in front of a Ford dealership showroom, before landing in the parking lot. The driver had a medical issue that caused him to become dizzy and veer across the grass siding, through a ditch and over a berm at high speeds, launching him 139 feet through the air.

Security cameras at a Crystal River, Fla., Ford dealership captured the shocking moment when an out of control car left the road in front of the showroom, jumped two rows of vehicles and landed in the parking lot.

Police say the driver of the white Toyota Camry had a medical issue that caused him to become dizzy and veer across the grass siding, through a ditch and over a berm at high speeds, launching him 139 feet through the air.

The Camry can be seen clearing about a dozen vehicles before crashing nose-first into the ground just a few feet away from a Crystal Ford employee who was putting a license plate on an SUV. It then skidded across the parking lot and slammed into three cars before coming to a stop.

WTVT reported that the driver wasn’t wearing a seatbelt at the time of the Tuesday afternoon incident and was taken to a hospital. Police did not reveal his identity nor the extent of his injuries, but told Spectrum Bay News that he was expected to be OK.

None of the 15 to 20 employees or customers at the dealership when the crash occurred was harmed.

According to a National Highway Traffic Safety Administration study, there are approximately 20,000 accidents caused by medical episodes each year.