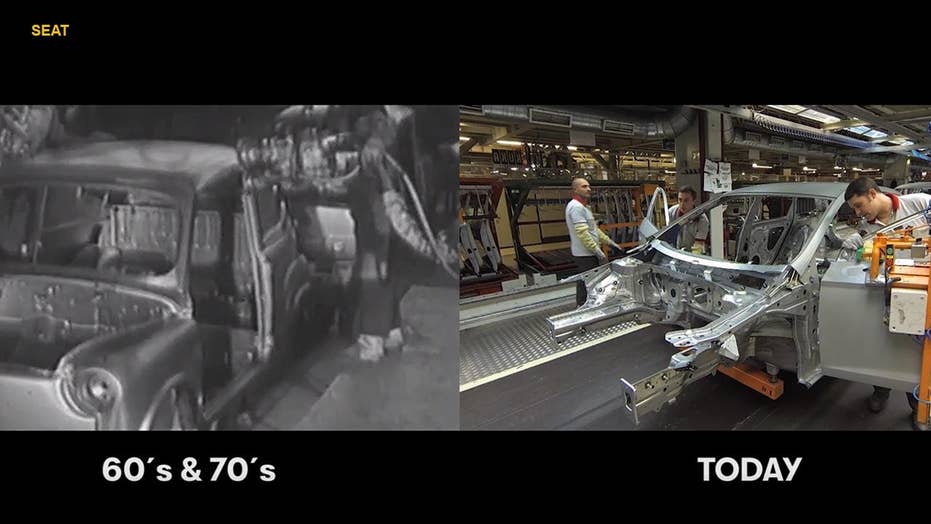 Then and now: Split-screen video shows how car production has changed in 50 years

A new video released by SEAT's Martorell factory near Barcelona, Spain, gives a fascinating look at the evolution of car manufacturing over the past 50 years. As the split-screen video shows, jobs that used to be done by hand are now streamlined, with most of the heavy-lifting left to a team of 2,000 robots. The video was released to commemorate SEAT's next leap forward in auto manufacturing, as the plant begins production on electric vehicles.

This fascinating video illustrates the evolution of car manufacturing over the past 50 years.

The split-screen film shows how humans are helped out with heavy lifting by state-of-the-art robots at [VW-owned] SEAT's Martorell factory near Barcelona, Spain.

Designers, once armed with pencils and erasers, would come up with endless drawings on paper while today's team is equipped with tablets, virtual reality glasses and floating screens.

The result is a clinical and high-tech environment where more than 500,000 new cars rolled off the production line last year.

In the 1960s, staff had to endure temperatures of more than 40 degrees - with no air-conditioning.

But they now work in heat-controlled rooms with ergonomically-friendly equipment while the heavy lifting is left to a team of 2,000 hands-on ROBOTS.

These machines create the flawless bodywork expected on a new car.

The video shows how cars were previously painted completely by hand in a messy job for staff.

However, this role is now overseen by humans and carried out by 84 robots, which apply thin layers of paint in a spray booth before the latest generation scanner checks the surface is smooth.

Martorell has robots working autonomously in the metal workshops and assembly lines.

The mechanical members of staff team up with more than 7,000 humans to ensure 2,300 new cars roll off the production line each day.

This high-tech process resulted in a record-breaking 517,000 cars being built at the plant last year, with 80 percent exported from Spain.

SEAT would make around five cars per day during the Sixties - but today it takes just three minutes for the same number of cars to be built at the facility in Martorell.

More than 62,000 of these new models were delivered to customers in the UK, an increase of 12 percent on the previous year.

Technology has not only transformed the production of cars, but it has also revolutionized the buying process.

In the 1960s it could have taken up to two years for a customer to get their SEAT 600, but today buyers can order their new car in 10 minutes and with just five clicks of a mouse.

SEAT released the video as it moves into the next stage of its history - the production of electric cars.

Luca de Meo, president of SEAT, said: "Soon we will begin a new, even more exciting, second phase with the ambition of being major players in the fields of electrification, connectivity and shared mobility.

"Everywhere we will be present, we will be striving to make cities cleaner and safer, and mobility more accessible.

“We will build expertise in battery technology, new fuels for combustion engines, 5G connectivity, autonomous driving functionalities, and in integrating our products into mobility platforms."

The manufacturer has said it is developing six electric and plug-in hybrid models as demand for alternatively fuelled cars continues to grow.