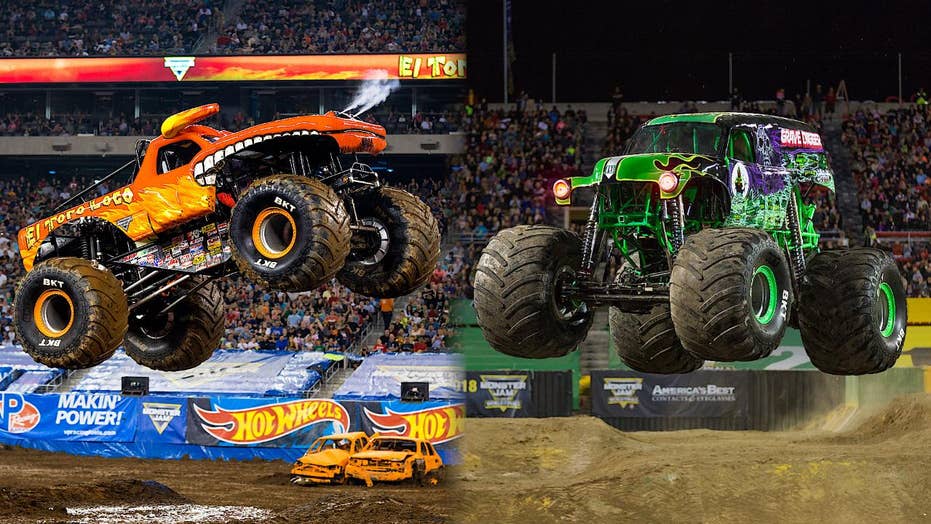 Join Fox News for an exclusive look into Monster Jam’s massive Florida headquarters, where they build nearly every item for the trucks in-house and explain the technological game-changers that hold these gargantuan trucks together.

You've probably heard the expression, “As American as motherhood and apple pie.” After a visit to Monster Jam World headquarters in Palmetto, Florida, you may wish to replace “apple pie” with “monster trucks.”

B.J. Johnson is driver of the Gas Monkey Garage truck and Coty Saucier drives the Monster Energy Mutant truck for Monster Jam Live, but the two are also full-time mechanics who work building the behemoths when they’re not competing in them.

Nearly every item for the trucks is built in-house at the massive facility that houses them, Johnson and Saucier told Fox News.

The frames, which are common among the trucks, have to be custom-built and be able to fit any of the series’ signature bodies, which regularly get destroyed during the events.

Shock performance is crucial to driver safety and a truck's ability to perform death-defying tricks, and the suspension technology has evolved dramatically over the years. The latest designs deliver up to 30 inches of wheel travel and allow the trucks to land safely after jumping over 30 feet up in the air.

“Starting in the early 90s, trucks were just pickup trucks with leaf springs and little-bitty shocks,” Saucier said. “Now, the shocks take anywhere between 300 to 400 pounds of nitrogen pressure, and that’s the biggest game-changer in Monster Jam ever.”

New full-containment seats also represent another revolutionary safety step in Monster Truck technology, as they better protect the drivers regardless of what they’re getting up and down to.

“Each seat is built specifically for each driver,” Saucier explained. “Everything from the ribs to the shoulders is accounted for in the seats, you are one with the truck.”

They’re so snug, he said, that you can practically hang upside down in them without seatbelts.

Another major change in the last five years, said Johnson, are the locking differentials that transmit power from a truck's 1,500-2,000 hp engine to its wheels and 66-inch tires. The trucks used to have open differentials, which made them easier to drive, but they didn’t deliver the same amount of traction. The update lets the drivers come up with even wilder tricks.

Just like a Fourth of July fireworks display ‒ which you pretty much get at every event ‒ Johnson exclaimed that “it’s loud, it’s proud, and it’s in-your-face. That’s Monster Jam.”

To see how BJ Johnson and Coty Saucier actually get into their monster trucks, and for the full interview, watch the video above.