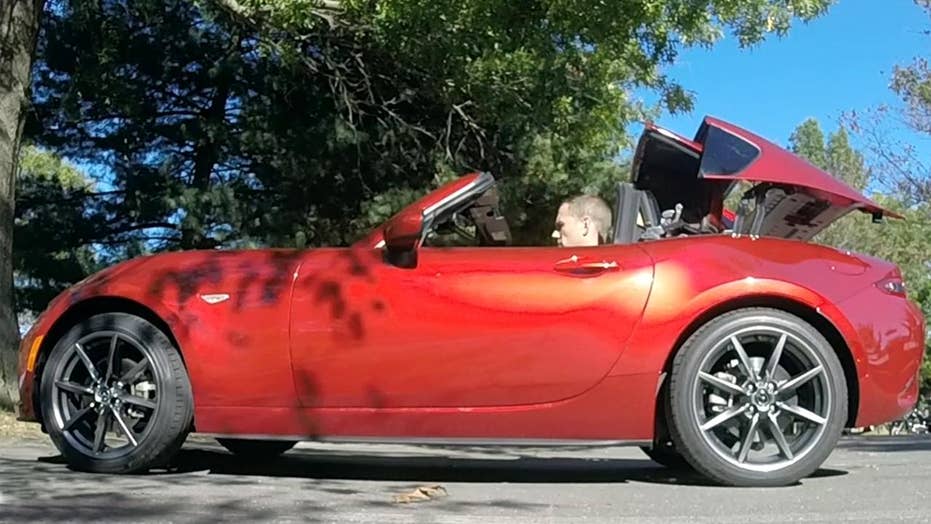 The Mazda Miata MX-5 RF is a convertible sports car that pops its top in a very unusual way.

The Mazda Miata MX-5 RF is noisy, but its name has nothing to do with radio frequencies. The letters at the end stand for “Retractable Fastback.”

That doesn’t exactly describe it, either.

The car is not a fastback. It may look like one in profile, but it has flying buttresses, a recessed rear window and a targa top, just like Magnum P.I.’s Ferrari. The roof is power-retractable, however, through a mesmerizing 10-second dance.

Flick a toggle switch and the rear section — comprised of the buttresses connected by a basket handle — rises up to expose the bin where the Miata soft top’s roof normally goes. The roof panel and rear window flip and fold away into it, and the rest falls back into place. What you’re left with is a very different-looking Miata, which was the point.

The last-generation Miata was also available with a retractable hardtop, but it was shaped like a solid version of the standard fabric roof. It looked bulky and awkward when it was closed. The model was a big seller, however, so Mazda North America design manager Ken Saward says he and his team really wanted to do it justice this time around. They did. The RF has the flair of a classic sports car, roof up or down.

While taking photos of it in a parking lot, I was approached by an ancient man wearing a U.S. Navy ship baseball cap and driving an SUV with U.S. Marine stickers all over it. He asked if I was married. Not sure where he was going with the line of inquiry, I was honest and answered yes, to which he responded, “Too bad, you’ll be chasing the single girls away in that thing. It’s hot!”

He wasn’t wrong about the attention the car gets. Compared to the regular Miata, it turns a lot more heads. It’s amazing what a little plumage can do.

But its primary purpose is to give the car a more coupe-like feel, and at this it’s less successful.

To keep its weight down, the Miata does without much sound insulation throughout. The RF may prove to be a little warmer in cold weather, but it doesn’t seem significantly quieter than other Miatas I’ve driven, especially on the highway.

That’s also true when the roof is down. While the open rear window means you’re not scooping in too much air, the corner of the basket handle catches enough of the breeze right next to your ear to stir up a racket. Rolling up the window helps, but then what’s the point?

Dynamically speaking, though, the RF is essentially the same as any Miata. Which means it’s very good. The transformation only adds 113 pounds, and it’s been well-accommodated through adjustments made to the suspension and steering to maintain the Miata’s legendary handling. There’s no change to its 155 hp four-cylinder engine, so, head to head, the RF would lose at an autocross. But without a stopwatch handy, you’d never know the difference.

You will notice the difference in price: about two-and-a-half grand above the soft top, depending on the trim level. The RF starts at $32,430 for a performance-focused Club and $33,795 for a Grand Touring with leather upholstery, lane-departure warning and a few other luxury niceties. Sorry, bargain shoppers, the RF is not available in the Miata’s entry-level Sport trim.

High fashion does not come cheap.