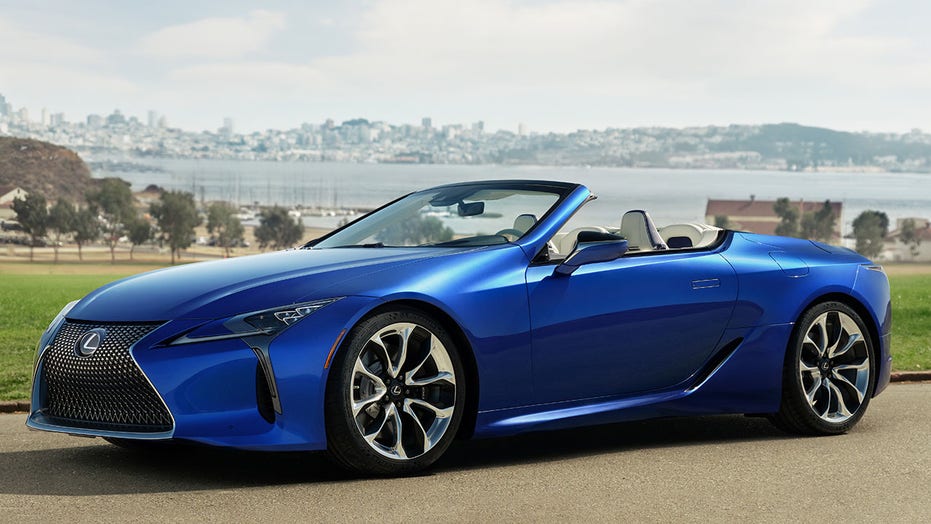 The 2017 Lexus LC500 is a sporty, luxurious grand tourer that presses (almost) all of the right buttons, says FoxNews.com Automotive Editor Gary Gastelu

If someone asked me to design a new luxury convertible for affluent American, I’d tell them it needed dramatic styling, an opulent interior and gobs of power. Unfortunately for the U.S. automakers, who don't make anything like that, Lexus beat them to it.

The 2021 Lexus LC500 Convertible is the drop-top version of the LC500 coupe that debuted in 2017 with concept car looks and a throaty, naturally-aspirated 471 hp 5.0-liter V8 engine. Lexus doesn't sell many, but they stand out on the road like few cars do and the head-turning design carries over to the convertible.

The $93,975 LC500 holds its own against some top European GTs, despite its relative lack of cache, and the convertible follows suit. It also overshadows the Lexus SC430, which was more of a bulbous and bloated cruiser that didn’t have the sporty edge of its successor or nearly as much panache.

The $102,025 starting price is the highest of any Lexus, and will ensure its rarity, but it’s backed up with a high-end cabin that would look good at double that price and is marred only by Lexus’ difficult to use Remote Touch touchpad-controlled infotainment system, which it will soon be giving up on in future models due to customer feedback, but not soon enough for the LC.

The tiny +2 rear seats carry over from the coupe and remain more decorative than functional. A micrometer would be suitable to measure the legroom, the seatbacks are vertical and it can really only accommodate anything resembling a primate when the top is down.

The LC500 looks great when it is and sounds even better. Anyone who owns a typical Lexus isolation chamber will be shocked at how raucous the V8 is when you use it in anger, and people looking the other way might think a muscle car just passed by. One pretty much did.

Although it weighs more than 4,500 pounds, the LC 500 Convertible will accelerate to 60 mph in 4.6 seconds as it seamlessly rips through the gears of its 10-speed automatic transmission on the way to a top speed of 168 mph.

And it has the moves to go with the speed. The adaptive suspension firms up nicely in Sport+ mode without becoming too harsh, or contributing to any undue chassis flex. It’s engaging and sure-footed, but if you’re right foot is heavy enough can get unruly in all the right ways. Nevertheless, the ride quality is excellent and only let down on the roughest surfaces by the low-profile tires mounted to the optional $2,650 style-over-substance 21-inch-wheels my test car had.

Between those, the head-up display, limited-slip rear differential and a $5,290 Touring Package that added finer leather upholstery, a 13-speaker Mark Levinson audio system and seats with heater fans for your shoulders, the out-the-door price was $111,920, which can be considered a bargain compared to its direct competition.

It's very much a Lexus in this way and has the sort of high reliability ratings and relatively low maintenance costs expected of one of the brand’s models, not to mention a 6-year/70,000-mile powertrain warranty.