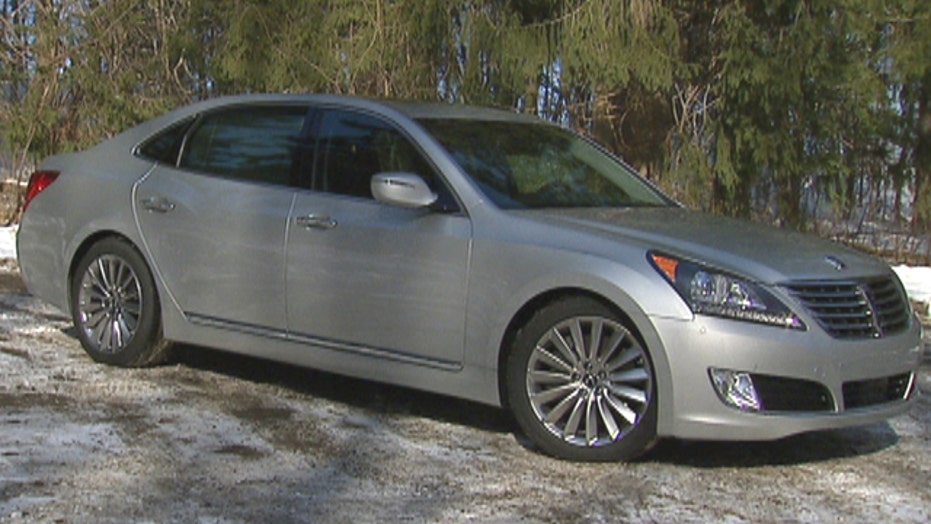 The Equus has been the mightiest steed in the Hyundai's stable since it went on sale for the 2011 model year, and a surprise hit for the one-time long-shot luxury brand. So it's earned itself a nice grooming for 2014.

The updated full-size sedan still competes against the likes of the Lexus LS and Mercedes S-Class, but at a starting price of $61,920 it costs anywhere from 10 to 30 grand less.

It comes in two breeds: Signature and $68,920 Ultimate, each fully specified out with no options available. That's uncommon in a class where pricey, personalized, special-order cars are the norm, but it's one way Hyundai keeps costs down.

Both models get a new grille, bumper, lights and a few other exterior tweaks, while more substantial changes are found inside. There you'll find a new dashboard layout equipped with a standard 9.2-inch infotainment and navigation system that's controlled by a console-mounted knob; it's complemented by a flat-screen instrument cluster and heads-up display on Ultimate models. A sweet 17-speaker Lexicon audio system brings the noise, of which there is virtually none when it's turned off. This is one quiet car.

Rear-seat passengers get first-class service in heated and cooled reclining seats, with Ultimate models adding lumbar support and a dual-screen entertainment system. The right rear passenger also has a button that folds and slides the front passenger's bucket as far forward as it will go to claim epic amounts of legroom. Unfortunately for would-be supervillians set on crushing their enemies, it doesn't work while someone is sitting in it.

The overarching style is conservative at best and nowhere near as fashion-forward as the other cars in the Equus' class. It's very last-season, but at these prices what do you expect, haute couture? Then again, Hyundai's less expensive cars are a lot more cutting edge.

Hyundai's award-winning 429 hp 5.0-liter V8 carries over, as does the 8-speed automatic transmission and rear-wheel-drive it's connected to. All-wheel-drive is not available, but there's a new Snow drive mode that does a pretty good job in a pinch.

While out testing the Equus, I came upon a snow-covered gravel road in the country that proved nearly impossible to drive on in the Normal or Sport settings, the car apparently intent on doing an impression of Hyundai drift racer Rhys Millen the entire time. Switching it to Snow easily put grandmother's house safely within reach.

As before, the Equus rides on an air suspension that gives it a unique, almost aquatic ride. Everything feels like it happens in slow motion, its nose gently bowing when you slow down, for example, like a boat pulling up to a pier. The effect is enhanced by the sound of the engine, which is reminiscent of a well-muffled inboard motor.

It's a pleasant place to spend the day, and it comes with a fair amount of driver aids, including radar cruise control, lane departure warning and parking cameras all around. But it doesn't really move the needle on the tech front.

The old-fashioned service is impeccable, though. Hyundai will bring an Equus to your home or office for a test drive and pick up and deliver it for free scheduled maintenance for the first three years or 36,000 miles.

Bottom line, the Equus is still about the bottom line. It does everything a luxury car needs to do, even if it comes up short on brand cachet. If you're the type of person who wears Gucci underwear and manages to let people know that, keep your pants on and move along, there's nothing to see here. But, if you've saved your dollars by not squandering them on labels and are just looking for a comfortable fit, this off-the-rack ride may be worth trying on.