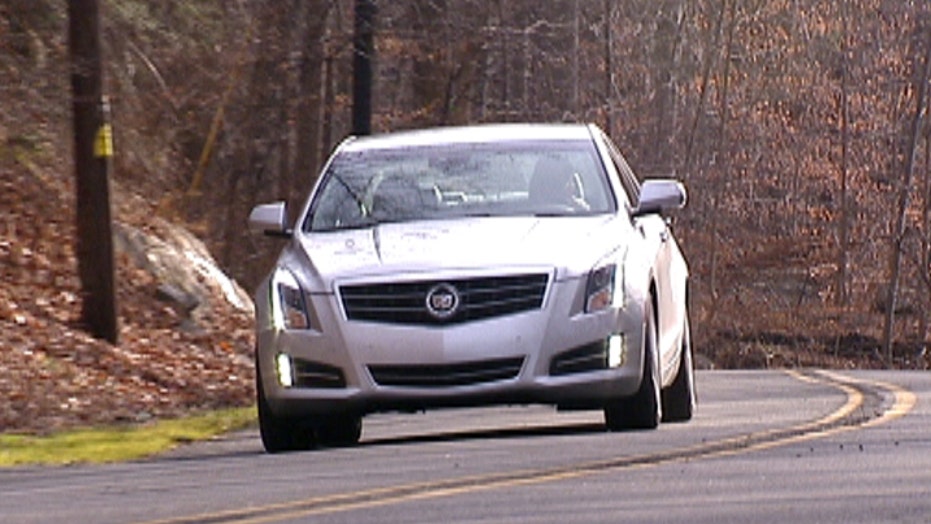 Cadillac Versus the World

You don’t often see the president of an automaker on fire, but it’s a sight to behold when you do.

Not literally, of course, but at the unveiling of the 2013 Cadillac ATS in Detroit last January, Mark Reuss was so stoked about the car, you’d think he built it himself.

In a way he did. As President of the company’s North American operations, an engineer by trade, licensed-to-race driver and all-around car guy, he likely had more of a hands-on involvement with the development of the car than most head honchos do with theirs. So his excitement was understandably palpable.

Lucky for him, it was also justified.

The rear-wheel-drive ATS compact is new GM’s first real shot at reestablishing Cadillac as a “Standard of the World” automaker. It counts the BMW 3-Series and Mercedes-Benz C-Class among its direct competitors, and Caddy isn’t shy about making the comparison.

An all-new vehicle from the ground up, the ATS rides on a platform largely made of high-strength steel in an effort to keep its weight and cost down while maximizing both the efficiency and dynamics of the vehicle. It also helps make it safe, evidenced by an across the board five-star NHTSA crash test rating.

Styling is a toned-down version of Cadillac’s signature “art and science” design, but doesn’t skimp on the tailfin-shaped brake lights or LED accents, which can be found both in light bars in the headlight clusters and embedded into the illuminated door handles. The overall look is all-American and doesn’t try to mimic the Germans or Japanese, another sign of the confidence Caddy has in this car.

The cabin is a mix of French-stitched leather and leatherette, wood and chrome trim, and piano-black inserts that dial up the expected glitz without straying too far onto the gaudy side of the street. As with the exterior, it’s a very distinctive design.

Analog gauges in the instrument cluster are supplemented with a digital display divided into three configurable sections, while touch-sensitive pads handle climate and audio control duties on the center console. Some models are also equipped with Cadillac’s iPad-like capacitive touch screen and voice command-based CUE infotainment system, which can be outfitted with navigation and Pandora integration.

All of the touchy stuff takes some getting used to. Tap the screen or a pad slightly off the mark and nothing happens, or too fast and they can’t keep up. Of course, trying to press a knob or turn a button doesn’t work well, either, so it’s mostly a matter of accepting how it operates and getting into the groove.

Three engine choices are available: a 202 hp 2.5-liter four-cylinder; a 272 hp 2.0-liter turbocharged four-cylinder; and a 321 hp 3.6-liter V6. All-wheel-drive is available on the latter two, and six-speed automatic transmissions are standard equipment across the board. A six-speed manual is offered on the turbo as a no-cost option to gin up the ATS’s sporting credentials.

The entry-level model gets 33 mpg on the highway at a starting price of $33,995, but isn’t expected to be the top-seller. Caddy predicts that most buyers will go for the 2.0-liter, which combines good power with a still solid 31 mpg rating. The V6 starts ringing in at $42,090 and delivers 28 mpg.

My first experience with the ATS was a single hot lap on a racetrack, but by the second corner I was sold. It was a V6-equipped car, very eager to launch down the straights and well-behaved in the curves. A manual turbo on hand was also fun in this environment, but not nearly as authoritative.

I doubt anyone would drive the ATS like this off of a dealer lot, but it doesn’t take long to get the point of this car, and short test drives should do the trick. Longer ones, like the week I spent with it a couple of months later, live up to the initial impression, but uncover a couple of nits deserving of picking.

The engineers dialed in a perfect ride and handling balance that doesn’t mind pockmarked roads, but can still handle the twisties. Top of the line models are available with GM’s terrific magnetically-controlled active suspension system, but it hardly seems necessary. Hats off to whoever decided to limit the wheel size to 18-inches and skip the trendy the ultra-low-profile tires, which would’ve messed this all up.

The ATS is not Buick quiet (yes, that’s a thing now,) but that seems intentional. Road and wind noise are subdued, but when you get on the gas the engine makes itself known. It’s not the silkiest sound, but improves with anger, so keep your foot in it. Leave one on the brake when you do, and a very smoky burnout is your reward.

The bucket seats with adjustable bolsters in my Performance trim level tester were very huggy, trimmed in fine hides, and had a vibrating alert that warns you if you start drifting from your lane or are about to run into something. Wonderful for the turny stuff, they could use a little more padding for long hauls. But I’m an achy middle-aged man, so take that whine with some salt.

I persevered, however, because this is a toy you don’t want to put away. It’s as light on its feet as they bill it to be, drives very small and has the kind of steering response that a Chevy Camaro should. Rumors that the next generation of that car may be based on the ATS platform are very promising.

Less so are the prospects for bringing more than one friend along for the ride. The ATS may be a compact, but it has less rear legroom than the Chevy Spark microcar, and with a six-footer in the front seat literally none. The latest 3-Series is a stretch limousine in comparison. You’d think Cadillac, of all companies, would know better about such things. (I’ll add that the trunk is also cozy and nicely trimmed for those who find themselves riding in there, but only to meet the requisite Cadillac review mob reference. Assignment complete.)

Then again, family duty of any sort isn’t the point of the ATS. It’s a gateway car, meant to get you while you’re young and put you on the Cadillac road to success so its salesman can simply move you up the ladder in future years, rather than having to work hard to steal customers from other brands.

As with other Caddy’s, the flavor of the ATS may be too American to get prospective buyers out of their foreign rides, but if you’ve never owned something in this class before it could turn out to be very persuasive.

It certainly made the boss happy.