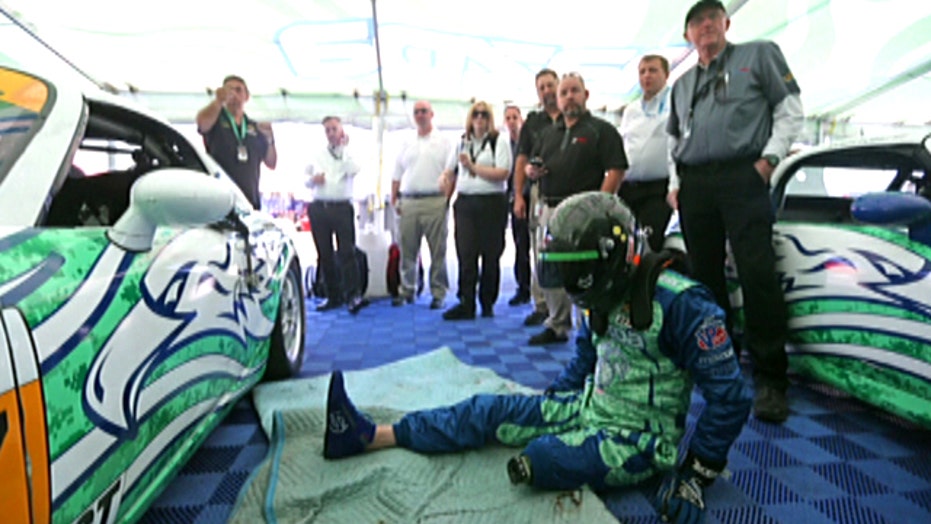 Staff Sergeant Liam Dwyer lost his leg in Afghanistan, but not his drive. The active duty U.S. Marine teaming up with Mazda factory driver Tom Long to compete in the Continental Tire SportsCar challenge racing series.

Marine Staff Sgt. Liam Dwyer always knew that despite losing much of his left leg in combat he could win races if he got the chance.

"Saying I'm excited is a major understatement," Dwyer told The Associated Press by phone shortly after the victory. "I am ecstatic about this."

Dwyer drove the first 22 laps and was 25th in the 32-car field before turning the No. 27 Mazda MX-5 over to Long for the rest of the way. Long took the lead for good five laps from the end and went on to a nearly 20-second victory.

Dwyer served with the Marines in Iraq and Afghanistan. He was injured in Iraq in 2007 when he took shrapnel on the left side of his body while a turret gunner of a Humvee that was hit by a roadside bomb. Dwyer recovered and returned to civilian life when a major he had worked with asked him to join a special team headed to Afghanistan. Dwyer re-enlisted and was searching a compound in Sangin Province when he stepped on an explosive that sheared off his left leg above the knee.

The blast also damaged his right leg and right arm, to the point where Dwyer says he has little feeling in that hand.

Dwyer, like other military personnel with catastrophic injuries, called May 22, 2011, his "Alive Day."

"I know exactly what it means to myself and my fellow service member," he said. Four other Marines were injured in that explosion.

The 32-year-old Dwyer returned home for rehabilitation. He was fitted with a prosthesis for the leg and soon after began to think about fulfilling his need for speed. He began racing vintage sports cars and was encouraged by friends and family members to market his skills to other circuits.

Dwyer reached the attention of Freedom Autosport and Long came to watch his test run at Mazda Laguna Seca Raceway this past January. Long was impressed with Dwyer's steadiness and savvy on the track and gave him a positive review.

Freedom Autosport brought Dwyer into the fold and he'll run select rounds on the IMSA Continental Tire SportsCar Challenge series this year. His next scheduled event is Aug. 23 at Virginia International Raceway in Alton, Virginia.

The only thing Dwyer needs to race is a bracket and Velcro strip that allows him to keep contact with the clutch pedal. That, Dwyer says, allows Long or another driver to quickly take over when necessary.

Dwyer understands his backstory and military history are part of his appeal. He has no illusions, though, that he'll stay around long without top-notch driving skills. "There's always someone younger, faster, who's ready to move in," Dwyer said. "That's the way racing goes."

Long believes Dwyer has the makeup to excel.

"I was immediately impressed, not only with his attitude but his balance in the car," Long said. "There's an obvious fit."

Dwyer grew up in Waterbury, Connecticut, about 40 miles from Lime Rock. And that his victory came on Memorial Day weekend with those who served front and center made it a perfect time.

"I can't explain how awesome this feels right now," he said.