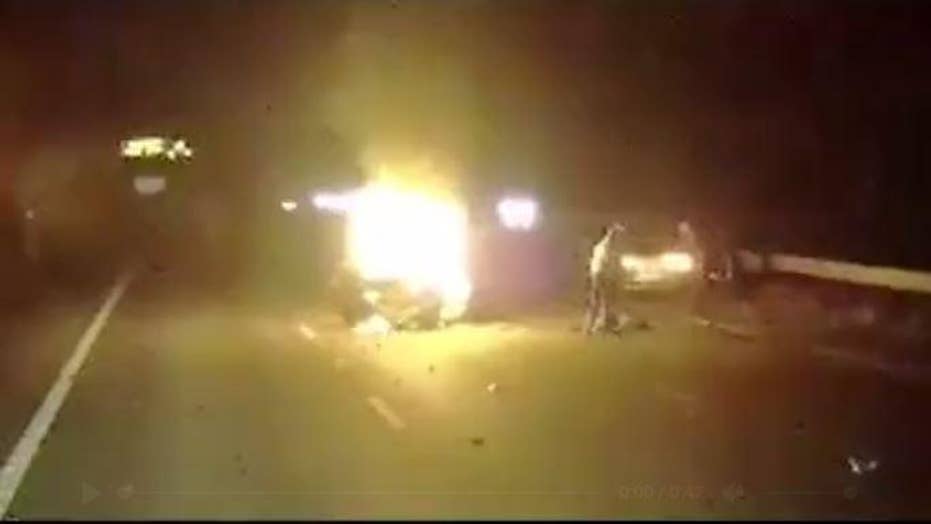 A dashcam mounted inside John Rastrick’s truck captured the moment he leaped into action to save a driver trapped inside her burning car.

A British truck driver has been awarded a medal of bravery for helping to save a woman from a burning car last January.

A dashcam mounted inside John Rastrick’s own truck captured the moment that the car collided with one in front of it and burst into flames. Rastrick can then be seen running toward the car and struggling to get the driver, Piri Mistry, out of it, before the passengers from the other vehicle involved in the crash came to his aid.

Just seconds after he pulled the 27-year-old clear, the gas tank ruptured and the car became fully engulfed in fire.

Mistry suffered a skull fracture in the accident that required her to relearn how to walk and talk, according to South West News Service, a British news agency.

“I don’t remember much from the incident, apart from what I have been told but I know I immediately thought I was going to die,” Mistry said at a ceremony held by the East Midlands Ambulance Service in honor of Restrick’s actions.

“Being able to say thank you to John and the crew for what they did means so much, I never thought I would get the chance.”

Resnick recalled: “I just knew at that moment that there was no one else around to help and I had to do what was right.

“I hoped to God that whoever was in the car had got out, but when I saw Pari in there, I put all my fears aside and tried to pull her out.”