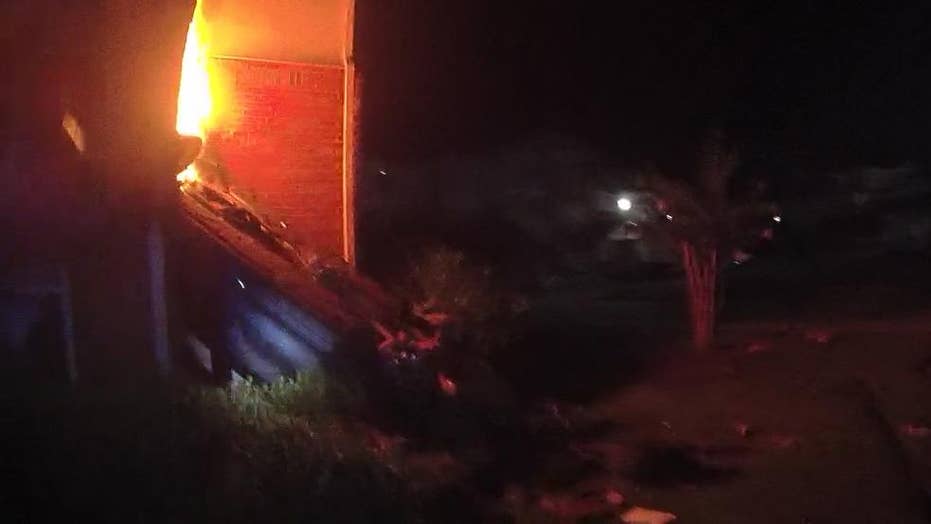 Surveillance video captures the moment a man violently crashes a stolen Mercedes into an apartment building before it catches on fire. The incident left one man critically injured.

Police have released footage from a dramatic car chase in Greenville, S.C., that ended when the suspect they were chasing struck a cyclist, severing his foot, and crashed into an apartment complex where an elderly resident was injured by debris.

Alexander Maurice Hill was driving a 2007 Mercedes-Benz that had been left running outside a convenience store and was reported stolen on the evening of Tuesday, July 17, when officers spotted the vehicle at around 2:30 a.m. Wednesday morning.

Police said Hill fled when they tried to pull him over and then drove away at such a high rate of speed that they had to call off the pursuit after just a few moments.

Shortly afterwards they spotted a fire in a nearby apartment complex, which they discovered Hill had crashed into after hitting the cyclist, driving down an embankment and rolling several times before slamming into a brick wall, as seen on security camera footage.

Video shot by police body cameras show the moment they found Hill hiding behind a sofa in an apartment. He had suffered several broken bones in the collision and was taken into custody and brought for medical treatment.

Meanwhile, other officers were alerted to the injured cyclist, who had been thrown into and trapped under a chain link fence, and applied a tourniquet to the leg his foot was severed from. The man, whose identity has not been revealed, can be heard on video saying “I feel like I’m going to die,” as police try to calm him down.

“Please, Lord in heaven, take this away. I’m hurting so bad,” he pleaded as they waited for the EMTs to arrive.

Despite the efforts of the emergency responders, the foot wasn’t able to be saved and the man’s leg was later amputated below the knee.

Police said that Hill has a history of criminal offenses that includes domestic violence and lynching, and that he has been charged with failure to stop resulting in great bodily injury, possession of a stolen vehicle and driving on a suspended license.