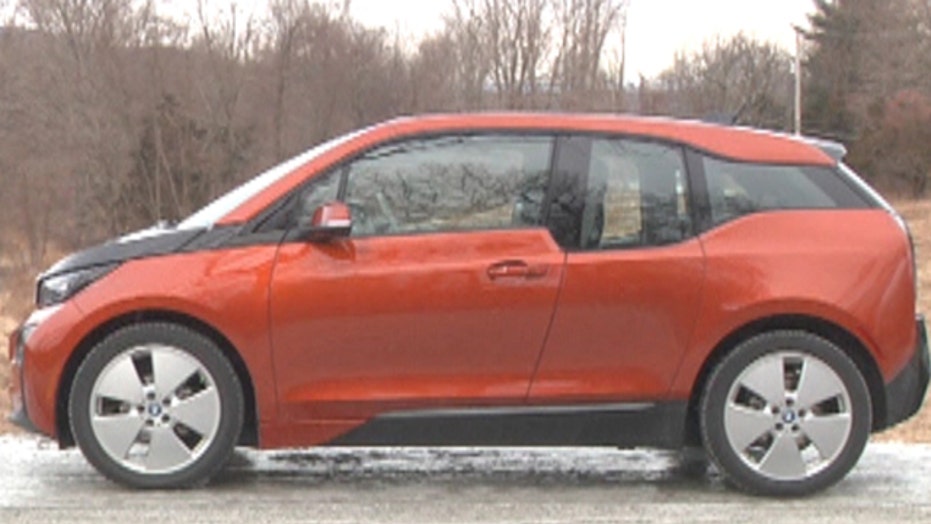 The BMW i3 REx is constructed from carbon fiber, its engine is in the back and it has rear-wheel-drive. If that sounds like the formula for a performance car, it is. It’s just a different kind of performance in this case.

The REx is a version of BMW’s i3 battery-powered city car that’s fitted with a Range-Extending gasoline motor that allows you to drive it after its electric charge has been depleted. It’s a tiny little thing with just two cylinders and 660 cc of displacement that started life as a scooter engine, but here it’s connected to a generator, not the wheels.

Unlike most other plug-in hybrids, including the Toyota Prius Plug-In and Ford Fusion Energi, which have short electric ranges and more conventional four-cylinder engines, BMW designed the i3 REx to be treated primarily as an electric car, burning gas only for emergencies and the occasional road trip.

That’s why the engine is so small. The i3 has been optimized to be as fit and trim as possible to maximize its electric efficiency, and it is tops in this metric. BMW left just enough room for the little engine that could plus two gallons of gasoline to get you to the next plug or pump.

The result is a $47,200 car that combines an EPA-rated 72 miles of zero-emissions range with 78 miles more per tank. For those with different needs, or less anxiety, the all-electric i3 has an 81-mile range and costs $3,850 less.

In either case, the compact i3’s innovative design is comprised of two major sections: the aluminum skateboard-like Drive Module that houses the battery, motor and suspension, and the lightweight carbon fiber reinforced plastic-framed, passenger-carrying Life Module that sits on top of it. It’s a tidy, practical package aimed at urbanites and dressed in an intentionally ultramodern style that’s open for debate, but looks very high resolution on the road.

It’s much the same on the inside, where the i3 REx is decked out like the bridge of the Enterprise-D and should appeal to 40-somethings whose surrogate father was Captain Picard. Recycled plastic, fast-growing eucalyptus wood and leather tanned with olive leaf extract trim check the green boxes, while active wool upholstery that’s allegedly never too hot or cold adds some passive tech. If only the bezel on the digital instrument cluster weren’t as wide as the screen itself -- but perhaps it’s meant to add to the retro-futuristic vibe.

The back seats are accessed through rear-hinged coach doors that require the front ones to be opened first, but since they’re pretty small, you probably won’t be using them that often. They are, however, put to good use folded down to expand the already reasonably sized cargo compartment.

With a full charge, the electric motor delivers 170 hp and 184 lb-ft of torque, plenty for a car this size. It has a lively feel and steering that’s almost too responsive. The i3 REx rides on oddly tall and narrow low rolling resistance tires that also improve aerodynamics, and the handling can get a little wiggly if you go serpentine.

It also uses the electric motor to slow down when you let up on the accelerator, recharging the battery in the process. It’s aggressive enough that you hardly ever need to apply the brake pedal. You will learn to love this, but things really get interesting as the battery drains.

When it gets down to about five percent, the gasoline engine kicks in to maintain the charge at that level. You lose a little performance, but nothing you’ll notice if you don’t floor it. What’s amazing about this is that the two-cylinder engine has only 35 hp.

That’s enough to keep you going at a constant speed, but not much else. The trick is that when you need to accelerate, the car dips into its battery reserve to give you a boost, then the engine and the regenerative braking fill it up again as you cruise along. I spent an entire day driving in this mode on every type of road, and it worked almost flawlessly.

The only hitch was when I came across the appropriately named Long Hill Road. It was a ski slope-steep ascent a little over a half-mile long, and by the time I got to the top I was out of juice and just putt-putting along at about 10 mph like a Conestoga wagon trying to get over Colorado’s Loveland Pass hauling a load of stolen gold. A posse could’ve caught me on foot.

The model I drove was a 2014, but BMW is working on an update that’ll enable the i3 REx to recognize that it’s in the hills, and to hold a bigger buffer in the battery when it is. Nevertheless, as soon as the ground leveled off, everything returned to normal.

Unfortunately, while the drivetrain is an elegant piece of engineering that eliminates weighty mechanical bits like a transmission and allows the engine to run at its most efficient speed all the time, it’s only good for 39 mpg in extended range mode. That’s not bad, but a Toyota Prius Plug-In gets 50 mpg, so there’s something to be said for direct drive.

Then again, the Toyota goes only 11 miles on batteries, while BMW expects i3 owners to drive primarily off outlet power. A fill-up takes 3.5 hours on a 240-volt home charger, while a fast charging station can get you to 80 percent full in 20 minutes. BMW and VW have just teamed up to build more of those to make cross-country driving easier.

So far, the i3 has been selling better than expected, with the REx proving to be a popular choice, but I think it could be better. On the cold days that I had it, I never saw anywhere near the maximum range, and having to stop every hour or so to fill up can be a drag. An extra two gallons in the tank would help, even if it goes against the electric grain BMW is going for. A button that lets you chose when you’re using the battery or generator could be handy, too.

There’s also a new Chevy Volt on the way that goes 50 miles per charge and will cost a lot less than the the i3 REx, and the larger, all-electric $30,000 Nissan Leaf has an 84-mile range, so compelling alternatives exist. That’s not to say I expect too many people to cross-shop those vehicles against the i3, any more than they would consider buying a Cruze or Sentra instead of a 3-series, but you need to know the lay of the land if you want to make it to the top.