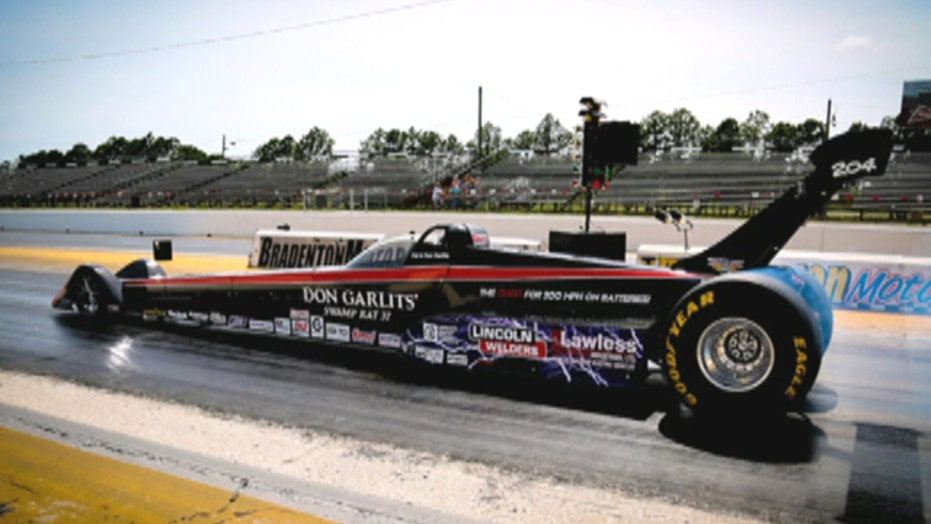 Don Garlits going for 200 mph in an electric car

Big Daddy is still the one to beat.

Fifty years after he became the first drag racer to break 200 miles per hour in the quarter-mile, Don Garlits is aiming to hit that mark again -- only this time in an electric car.

The 82-year-old’s Swamp Rat 37 is a high-tech dragster fitted with a 2000 horsepower electric powertrain that’s as quick as it is quiet.

The rail dragster features six GE motors connected to a two-speed rear end and can hit the 60-foot mark about as quickly as the nitromethane-powered monsters in the National Hot Rod Association.

Garlits said the difference is that everything is really silent at the starting line, but then “you step on the go pedal and, I mean, you take a ride!”

During a shakedown run at Bradenton Motorsports Park on April 30, Garlits made a 7.258-second pass at 184 mph, breaking a widely-recognized existing record of 156 mph.

But it wasn’t all fun and games; a malfunctioning parachute led to a trip off the end of the strip and into a field. Luckily, Garlits was uninjured and the car was only slightly damaged.

As for his interest in battery propulsion, the racing legend thinks today’s drag cars are too fast and cost too much to run, while electric power is relatively low maintenance compared to modern internal combustion racing engines.

“Drag racing was always something a lot of people could do, and not expensive, and have a lot of fun at it,” Garlits said. “They’ve driven that Top Fuel and Funny Car to unsustainable limits. You know, 330 mph in 1000 feet, $50,000 to make a run. There’s only a handful of people that can do that anymore.”

Instead of hitting the pits for an extensive service between runs, like liquid-fueled racers require, Garlits said he drove straight from the finish line to the starting line before his 184-mph pass.

His team is planning another attempt at 200 mph early next month after it makes a few tweaks to the electronic power controller and changes the gears to better suit the power curve of the motors.