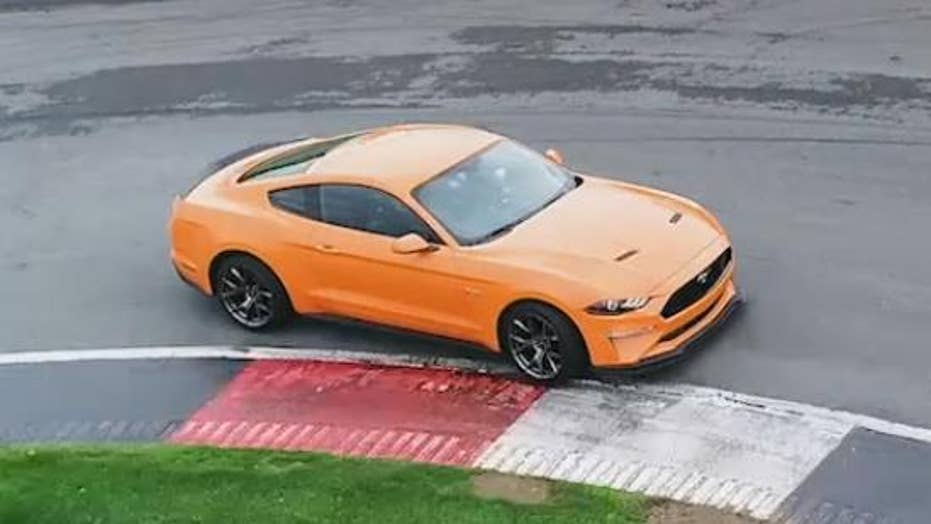 The most powerful Ford Mustang GT

The updated 2018 Ford Mustang GT is the most powerful one ever and is available with a performance package that makes it even more fun on the track. FoxNews.com Automotive Editor Gary Gastelu went to the Monticello Motor Club to try it out.

The Mustang isn’t Ford’s best-selling car, but it will be soon.

That’s because it will be the only true car the company sells in the U.S., as the brand switches to a lineup of mostly trucks and crossovers in a couple of years.

It’s doing alright now, though. The Mustang outsells the Chevy Camaro and Dodge Challenger here, and Ford says it’s been the best-selling sports coupe in the world since the latest generation launched three years ago.

To keep the ball rolling, Ford updated it for 2018 with mildly redesigned front and rear styling, more soft-touch trim in the cabin and an available full-digital instrument cluster. But the biggest changes are heard and felt, not seen.

Ford dropped the Mustang’s tried and true V6 engine, made its 2.3-liter turbocharged four-cylinder the new base motor and gave the GT a more powerful V8. The 5.0-liter truly is one now, thanks to a switch from liners to spray-in cylinder coatings that increased its displacement from 4970 cc to 5030 cc.

A blend of port and direct fuel injection, along with a freer-flowing intake and sky-high 7,500 rpm redline help to increase output from 435 hp to 460 hp, making this the most powerful Mustang GT ever. (At least until the new Bullitt edition arrives later this year with a promised 480 hp.)

There’s a 10-speed automatic now, but a six-speed manual is still standard at the GT’s starting price of $36,090. Believe it or not, the stick accounts for more than half of GT sales these days. Either can be had with a few semi-autonomous driving assist features, including radar cruise control and pedestrian-detecting automatic emergency brakes.

That’s great stuff on the street, where the Mustang remains an excellent cruiser, even without the optional computer-controlled MagneRide shock absorbers that are worth their weight in gold, not to mention their $1,695 price tag.

Ford claims one of these fitted with the 10-speed and set to its Drag Mode with launch control enabled will do 0-60 mph in 3.9 seconds, while the rest of the changes sharpen the handling without messing up the on-road ride too much. It’s a nice compromise for someone who uses their Mustang as a daily driver but likes to put it through its paces sometimes.

If you prefer doing the latter most of the time, you’ll want to check the box for the Performance Package 2, which costs $6,500, but is mandatorily bundled with another $2,000 package of comfort and entertainment features. It steps things up with foot-wide Michelin Pilot Sport Cup 2 tires, standard MagneRide shocks, more extreme tuning across the board, and a jutting chin splitter that produces downforce to squeeze the front tires into the tarmac and can take out someone’s ankles if you’re not careful with it. The only caveat is that you can only order the PP2 on GTs with manual transmissions. Sorry, lazy boys and girls.

Mustang Vehicle Engineering Manager Tom Barnes says the goal was to create a car that felt really alive. The kind of car that a track rat looking for the best handling might build for themselves, but with the bonus of factory integration and tuning for all of the modifications.

The incredibly responsive steering is the first thing you notice as those huge contact patches go to work, but the overall grip is monumental. During a couple of laps around a short circuit at the Monticello Motor Club, the PP2 felt right at home. It requires a recalibration of your expectations of what a Mustang GT should be able to do before you start getting anywhere close to the most out of it.

Unfortunately for me, it was a rainy, and those nearly slick steamroller tires turn into skates on anything resembling a puddle, so my time flying in it was limited. You have to tread lightly when things get wet. On public roads, the front tires keep your hands busy as they chase ruts and ridges in the pavement, too. Otherwise, a PP2 GT remains a very comfortable car. I drove one equipped with a set of racy and very huggy Recaro seats two hours from the office to the track and would happily do it again.

In fact, I did just that in the other direction at the end of the day.