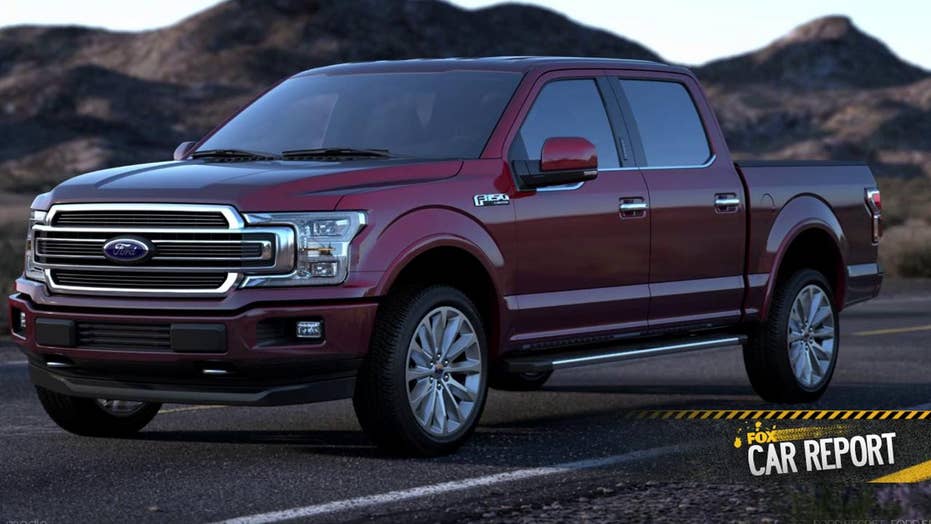 Ford took a big gamble three years ago when it introduced its all-aluminum F-150 and it paid off…bigly.

The automaker’s engineers, dealers and loyal customer base all came through, and sales have been going up ever since production of the next-gen pickup ramped up to full steam.

Nevertheless, the full-size pickup segment remains highly competitive and Ford isn’t ready to rest on its lightweight laurels, so it updated the F-150 for 2018.

It’s far from a new vehicle, but is a significant refresh that I had the opportunity to check out in lovely Dexter, Mich., before it goes on sale nationwide. Here’s the most important stuff you need to know:

The most obvious change is the F-150’s new grille and headlamps, which ape the look of the latest F-Series Super Duty’s. There are actually several different grills across the lineup, with all but one featuring twin horizontal bars that appear to be held in place by the ‘C-clamp’ style lights. An all-mesh version appears on a sporty STX trim package that’s available on the entry-level F-150 XL. I think the new grille looks better than the oversized, radiator-style one that debuted in 2015, and clearly so do a lot of people at Ford or they wouldn’t have changed it. (The high performance F-150 Raptor retains its 2017 design.)

It has stronger bones

The F-150 equipped with its 375 hp 3.5-liter twin-turbocharged V6 and max trailering package can now tow 13,200 pounds. That’s a 1,000 pound increase over 2017 and 700 pounds more than the top Chevrolet Silverado 1500 can manage. It’ll even beat a bunch of F-Series Super Duty configurations. The extra strength can be chalked up largely to a thicker-gauge steel frame that comes with the package, but there are also suspension modifications and a reengineered steering system to help you handle the extra weight on the move.

The F-150 has a selection of four new or updated engines, and they’re all more potent and fuel efficient than the ones they replace. The 3.5-liter turbo V6 received its power boost last year and was paired to a 10-speed automatic transmission that now trickles down to the 5.0-liter V8 and 2.7-liter turbocharged V6, each getting 1-2 mpg better fuel economy out of the deal.

The 5.0-liter remains the F-150 and segment payload champ at a maximum of 3,270 pounds, but will have an easier time carrying the load with 10 more horsepower and 13 additional pound-feet of torque for a total of 395 hp and 400 lb-ft. A new fuel injection system and spray-in bore liner tech borrowed from the Mustang Shelby GT350’s engine contribute to the added oomph.

Entry-level buyers aren’t forgotten, either. They get an all-new 290 hp 3.3-liter V6 that is more powerful than the old 3.5 liter, and ties the 2.7-liter for class efficiency honors among gasoline-powered full-size pickups at 22 mpg combined, even though it is the only engine that still comes with a 6-speed transmission. (The first diesel F-150 is set for a Spring release and should be the mileage king.)

It can’t drive itself, but…

There’s a 360-degree camera system that’s handy when parking, or squeezing through trees; a blind spot monitoring system that can be programmed to take the length of your trailer into account; Pro Trailer Backup Assist, which uses cameras and sensors to help you drive in reverse with a trailer attached by taking over all of the steering while you use a knob on the dashboard to simply point the truck where you want it to go; adaptive cruise control that will bring the truck to a stop in traffic then go again if you’re not stationary for more than three seconds, even with a trailer attached; and a pedestrian detecting automatic emergency braking system. The only other full-size pickup offering that last one for 2018 is the Toyota Tundra.

Ford’s engineers say the aluminum body has performed as expected, so there were no major structural alterations for 2018. They did make a pretty significant change to the suspension, however, by switching from twin-tube to monotube dampers, which deliver a better ride. On the road, and a short off-road course Ford set up for the launch, the new trucks felt to me like they were more polished, even before I knew about the new shocks. That was true whether they had empty beds, were carrying a half-ton payload or towing trailers that weighed several tons.

Aside from a couple of new trim colors, the interior of the F-150 remains the same, but you can now fill it with crystal clear sound from new 10-speaker B&O Play audio system, at least on high end models.

The most expensive of those can run well over $60,000, but the starting price for a good old fashioned stripped F-150 work truck is $28,675, which is less than three hundred bucks more than last year.