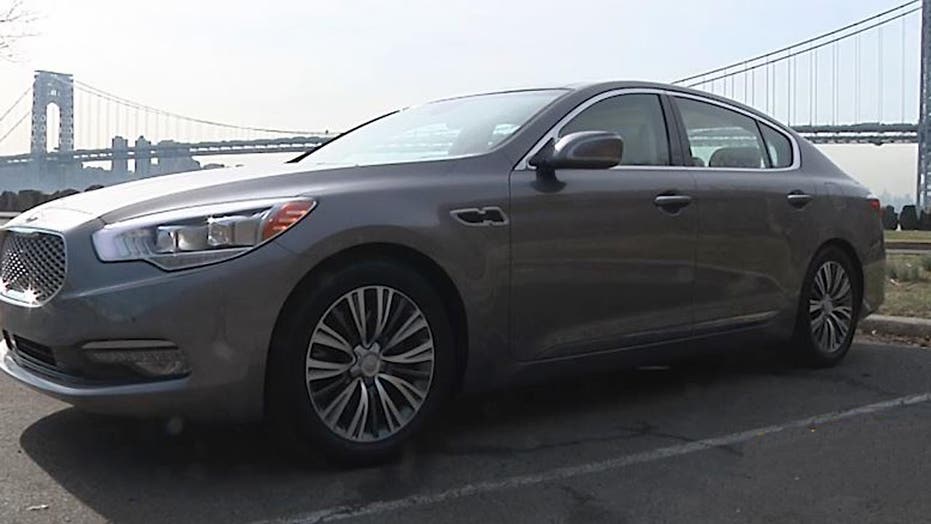 The car fit for a King

The old school American luxury car is alive and well. Except now it’s made in South Korea.

The 2016 Kia K900 may look like it’s trying to be a European sports sedan, but it’s really more of a plush boulevardier in the spirit of the Lincoln Town Car, Cadillac Fleetwood, and all the old boats on the block. This isn’t a bad thing.

Admit it, the only time you do anything in your luxury car that requires “handling” a Big Gulp is involved. The K900 doesn’t know the word.

It’s an enormous, Iowa-class battleship of a vessel. LeBron James is the pitchman for the K900 and, while I’m still skeptical that he’d actually buy one if he weren’t paid to, I have no problem believing that he and three of his clones would fit comfortably in it. It’s King size, for sure.

When the rear-wheel-drive K900 launched last year, it was only offered with a 420 hp 5.0-liter V8, but now there’s also a 311 hp V6 that’s more than adequate for the tasks that will most commonly be at hand: crawling through city traffic and making sleep-inducing freeway runs.

The new engine brings the starting price down to $49,950, which maxes out at $60,850 with all of the V6 model’s options boxes checked. That’s either a lot for a Kia, or really cheap for an alternative to an executive full-size like the BMW 7-Series or Audi A8.

The rear cabin can be furnished with heated, ventilated, reclining seats with adjustable lumbar support, plus its own climate control system. Up front, the wood trim is rich and glossy, the dashboard is upholstered in stitched leather, and the seats can handle a broad backside.

If you don’t think the name is prestigious enough to justify the price, don’t worry. Everyone who got in it gave me the “oooh, this is nice, what is this?” reaction, just like in a cliché commercial. When I told them, it didn’t seem to change their impression either way. It may not be quite as elegant as a Mercedes-Benz S-Class, but it is dressier than a Tesla Model S.

It’s not as high-tech as either of those, however. It won’t park itself or steer between the lines, but you can get adaptive cruise control with automatic emergency braking, blind spot and lane departure warning systems, and a 360-degree parking camera.

Both engines are silky, as are the 8-speed automatic transmission and the ride. The cabin is so quiet it’s like someone put it on mute. I’ve put 750-plus miles on K900s and loved every one of them. Well, almost.

While its smooth sailing most of the time, some harsh bumps can twerk the steering wheel in your hands. Passengers don’t notice, but I did, and I can’t think of the last car, luxury or otherwise, that’s happened in. It seems like something that could be easily rectified, though, and is the only blemish on the K900’s “serenity now” experience.

The K900 is not an exciting car to drive or look at, despite its phony fender vents, so it’s appropriate that it’s only available in four colors: Black, white, and two silvers. Livery drivers would love it and, with that back seat, your Uber rating would go through the roof – which in this case features panoramic glass that covers both rows.

But can it handle twisty mountain roads like those imports? I don’t know, because unless I go out of my way to find one, I never have to drive on any. Likely neither do you. President Eisenhower’s interstate highway system and the efficient suburban development it helped spawn saw to that. The K900 may be an immigrant, but it’s clearly pledged allegiance to the American way.

At least the way things used to be.