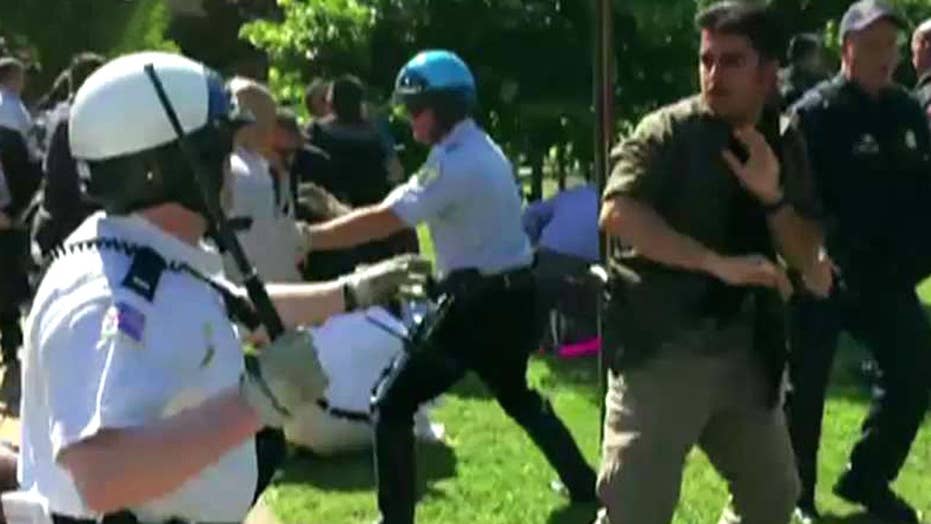 The U.S. ambassador in Ankara was summoned to the Ministry of Foreign Affairs, Turkey said, over what it called "aggressive and unprofessional actions" by U.S. security personnel against Turkish bodyguards in Washington during President Recep Tayyip Erdogan's visit last week.

The Monday move appeared to be in retaliation for calls in the United States for strong action against the Turkish security officers. The officers were seen hitting and kicking protesters outside the Turkish ambassador's residence in Washington during Erdogan's visit.

Two Turkish bodyguards were briefly detained after the incident. They were later set free and returned to Turkey.

U.S. Ambassador John Bass was given a "written and verbal protest" over the treatment of two security officers for being "contrary to diplomatic rules and practices," a Turkish Foreign Ministry statement said.

The two officers were part of Foreign Minister Mevlut Cavusoglu's security detail, according to the statement.

The Turkish ministry said it had requested that U.S. authorities conduct "a full investigation of this diplomatic incident and provide the necessary explanation."

"We can confirm the Turkish Foreign Ministry convoked our Ambassador to Turkey to discuss the violent incidents involving protestors and Turkish security personnel on May 16," State Department spokeswoman Heather Nauert said. "As we noted previously, the conduct of Turkish security personnel last week was deeply disturbing. The State Department has raised its concerns about those events at the highest levels."

The Turkish ambassador should be "thrown the hell out of Washington," Sen. John McCain (R-Arizona) told "Fox News Sunday."

"Those were his people and Erdogan's people that were sent out there. That's not America and it's not allowed in the United States of America," he said.

"We did call the ambassador of Turkey into the State Department to discuss what occurred with them and express our view that this is simply unacceptable," Tillerson revealed.

Tillerson said an investigation has to conclude before it's decided if the ambassador should be expelled.

The PPK has waged a three-decade-long insurgency against Turkey and is considered a terrorist group by the United States.